Building a diversified portfolio for a changing world

This century is unlike the past one for investors

One of the core challenges of investing is escaping the constant fog of war that creeps upon us when following the ups and downs of markets and the economy. The long-term goal should be crystal clear for most investors: achieve positive real returns. Ideally with relatively low volatility on the portfolio level as we cannot stomach large drawdowns.

The issue is that the financial world, especially the media, is focused on the short, rather than the long term. The irony is that it is much more difficult to invest in the former than the latter. It is almost impossible to predict the return for the S&P 500 for the next 12 months, even if every strategist on Wall Street has made a forecast for exactly this. In contrast, stock market returns are a function of valuations in the long term, so there is a lower probability of being wrong when calculating the approximate return for the S&P 500 for the next 10 years.

Clarity of mind and discipline are essential traits for successful long-term investing. However, it is also critical to retain the flexibility to realize when the world is changing structurally, even if this is happening only at a glacial pace.

We recently outlined a portfolio for the long-term as the world is evolving, and will continue to explore this further in this article.

The long-term outlook for returns

Ultimately, investing is largely a bet on economic growth. If the economy is booming, then earnings and valuations tend to increase, which benefits stocks, private companies, startups, and real estate markets. Even bonds benefit given lower default risk.

However, economic growth largely relies on productivity increases, which have been scarce over the last decade, and the growth of the working population. The outlook for the latter is not particularly positive as most developed and many emerging markets are already experiencing shrinking populations. For example, China will be losing close to 400 million people over the next 80 years. It is difficult to see how this will be anything but catastrophic for its economy or capital markets, especially given the high public indebtedness.

Capitalism, or at least large parts of the financial system, can be viewed as a Ponzi scheme that relies on continuous economic growth. Short-term crises can be managed via fiscal or monetary policy, but long-term negative GDP growth is challenging for the entire system.

Naturally, some countries will experience population growth but these are largely African nations that have little importance to the global economy. Comparing the economic performance of Africa to Asia over the last few decades, it is difficult to believe that Africa will become the economic powerhouse for this century.

Relationship between demographics and valuations

Although the demographic changes are occurring extremely slowly for fast-paced investors, they are happening. There is also more downside than upside to these forecasts given that the fertility rate has fallen much faster than expected in many countries, but does not jump upwards. People do not easily go from having two to four children.

The relationship between equities and demographics is quite simple: investors prefer stocks when young and in middle age, but then switch to bonds when nearing and entering retirement.

Although the US is one of the few developed countries where the population is expected to increase, the ratio of middle to old-aged persons will decrease, which should reflect in declining equity valuations in the coming decades. 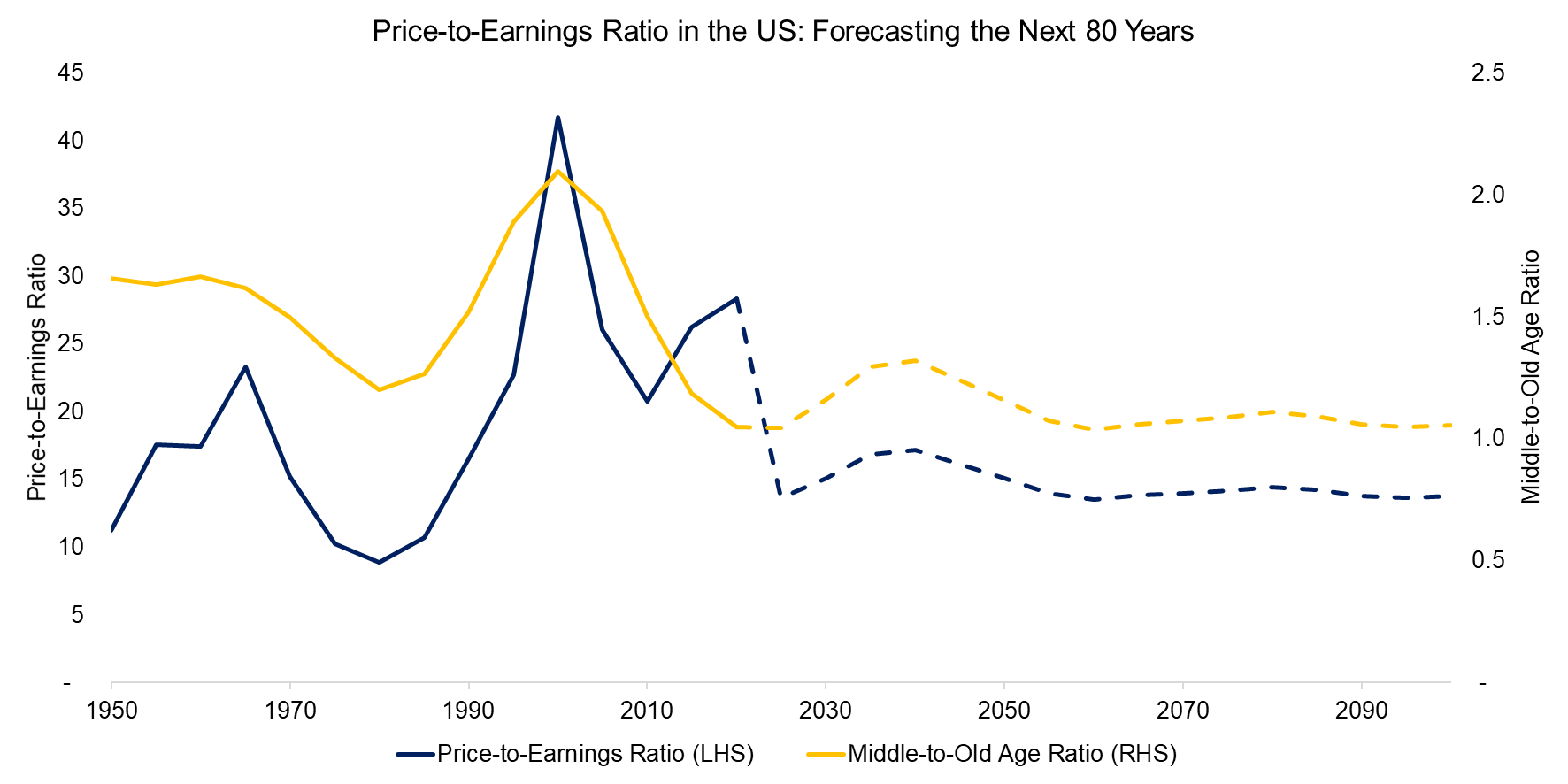 Portfolio construction for a low-growth world

Given the negative demographics, economic growth will be much lower or negative in the coming decades. Naturally, there will still be economic cycles, but the upside is capped. Market and economic volatility will be higher as there will be more shocks to the global financial system.

Partially this is due to many countries being highly leveraged, which will have to undergo painful debt restructurings. Japan is a prime candidate given debt-to-GDP of larger than 200% and a population that will shrink from 125 to 75 million between 2020 and 2100. Central banks might prolong such events for a time, but can’t compensate for such large population (investor) losses.

The majority of portfolios are ill-equipped for this long-term outlook as they are heavily biased toward positive economic growth, which can also be called being short volatility. A more sound long-term portfolio is balanced between long and short volatility exposure. 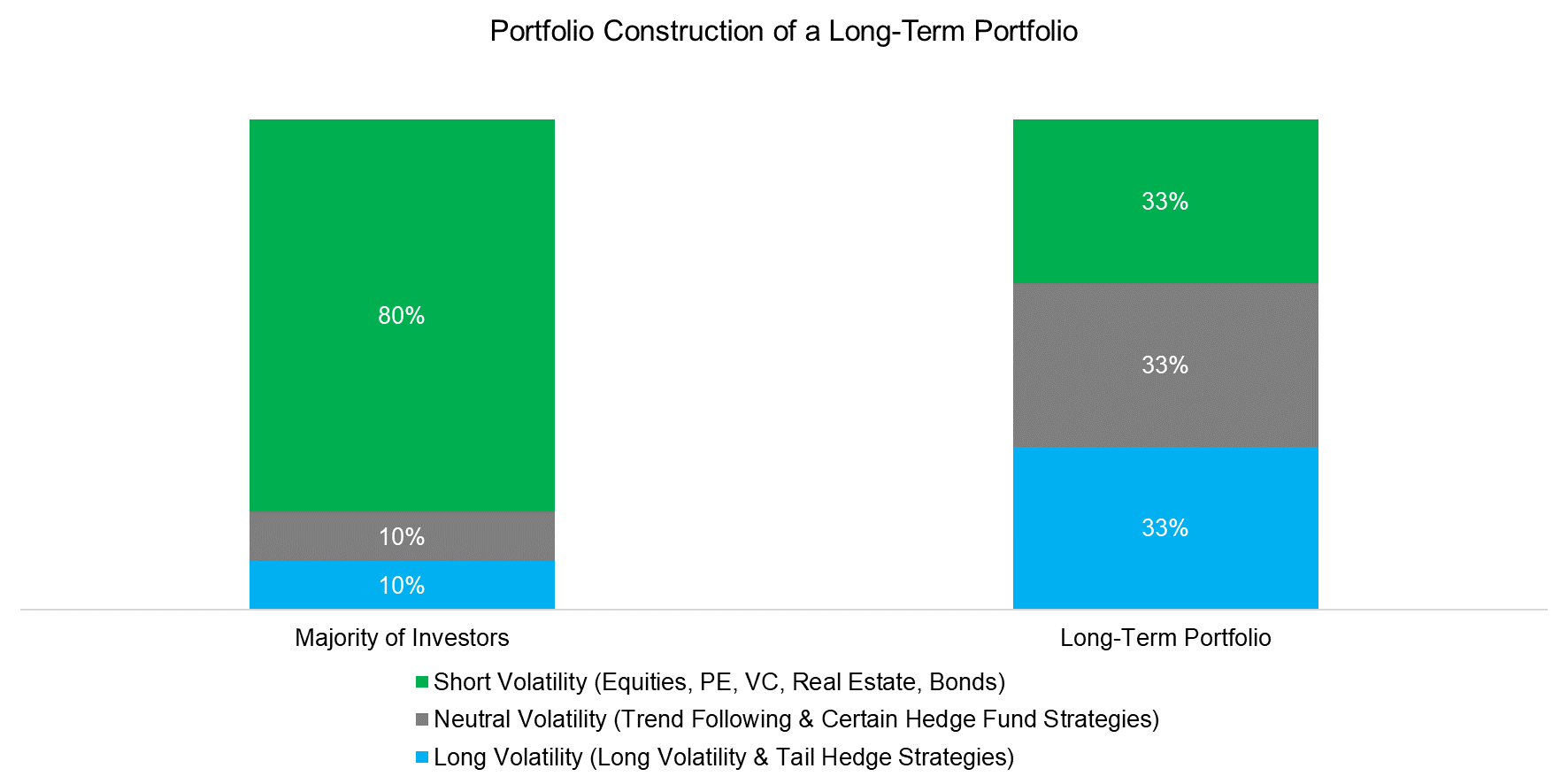 Creating a long-term portfolio that is less biased toward positive economic growth is not as complicated as it seems. The short volatility component can be achieved via an ETF that provides exposure to the US or global stock market. Although it is tempting to allocate to private equity, venture capital, or real estate, these asset classes are all equity proxies and do not provide any useful diversification benefits.

Bonds have become less attractive given low yields and will become even less attractive as the impact of negative demographics, ie a lack of new investors, will increase the default rates in coming decades.

Adding strategies that are neither long nor short volatility is sensible, where trend following strategies are an obvious choice. There will always be trends, regardless of the economic environment, and exploiting these systematically is attractive. Let the trend be your friend, especially given that these have become available via mutual funds and ETFs.

Finally, the long-term portfolio should have long volatility strategies that provide diversification benefits when stock markets suffer. There is a lack of liquid products, but investors can replicate the exposure via assets that feature risk-off characteristics. A simple combination of JPY/AUD and gold has historically provided the same exposure as the Eurekahedge Long Volatility Hedge Fund Index. 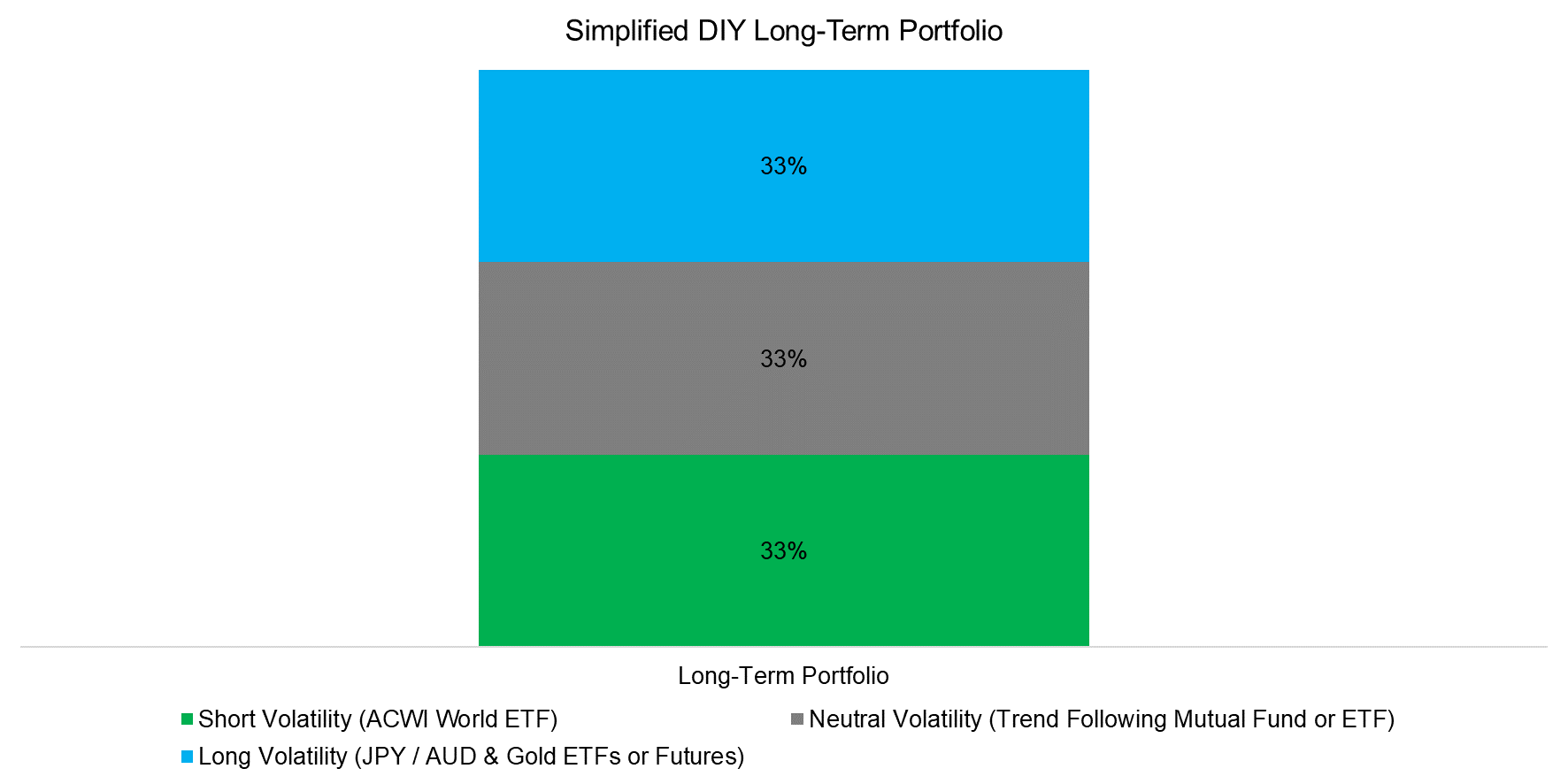 Equity considerations for the long-term portfolio

One of the objectives of the long-term portfolio is to be simple, not require too much maintenance, and be cheap. The natural inclination of investors is to increase the complexity by fine-tuning the allocations, which should be avoided.

However, some further thoughts on optimal implementation are reasonable. We will evaluate three options for the short-volatility component – namely plain-vanilla exposure to the S&P 500, risk-managed equities, and value equities. Risk-managed implies reducing the exposure to the S&P 500 to zero when the 200-day average is negative. Cheap equities simply represent value investing.

We observe that the performance of the long-term portfolio between 2002 and 2022 was not significantly different when using either of these three options for structuring the equities allocation. 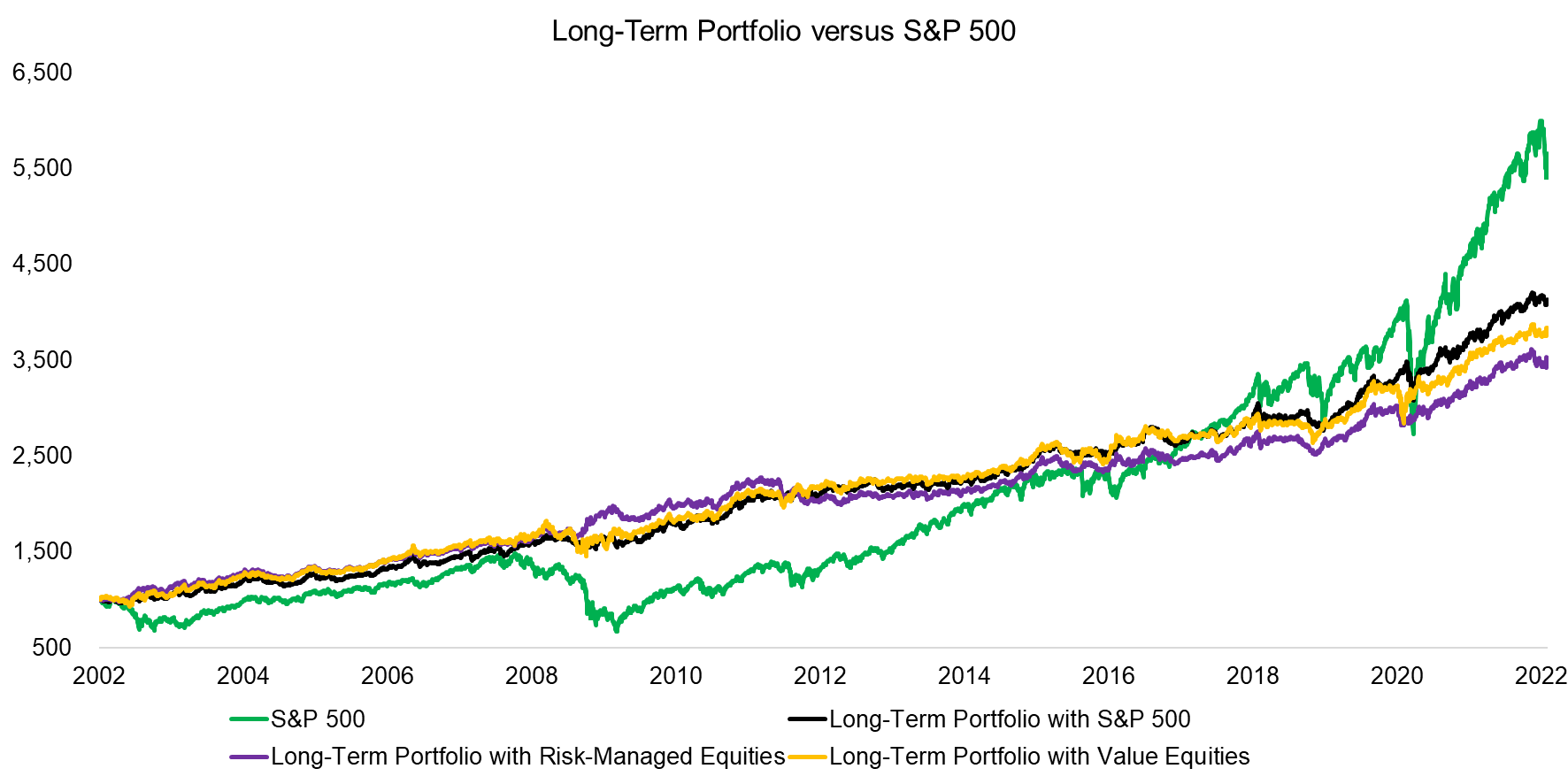 Naturally, the S&P 500 outperformed the long-term portfolio over the last 20 years, but that can be expected when comparing a diversified cross-asset class portfolio to an equities portfolio. Equities were great but the emphasis is on “were” when looking forward.

Moving back to the three types of equity exposure, we calculate the Sharpe ratios and observe that simply buying the S&P 500 would have generated the highest risk-adjusted returns when creating a long-term portfolio. Neither risk management nor the focus on cheap stocks has worked well over the last decade, although that does not necessarily mean that these are worse approaches going forward. Both are backed thoroughly by academic research. 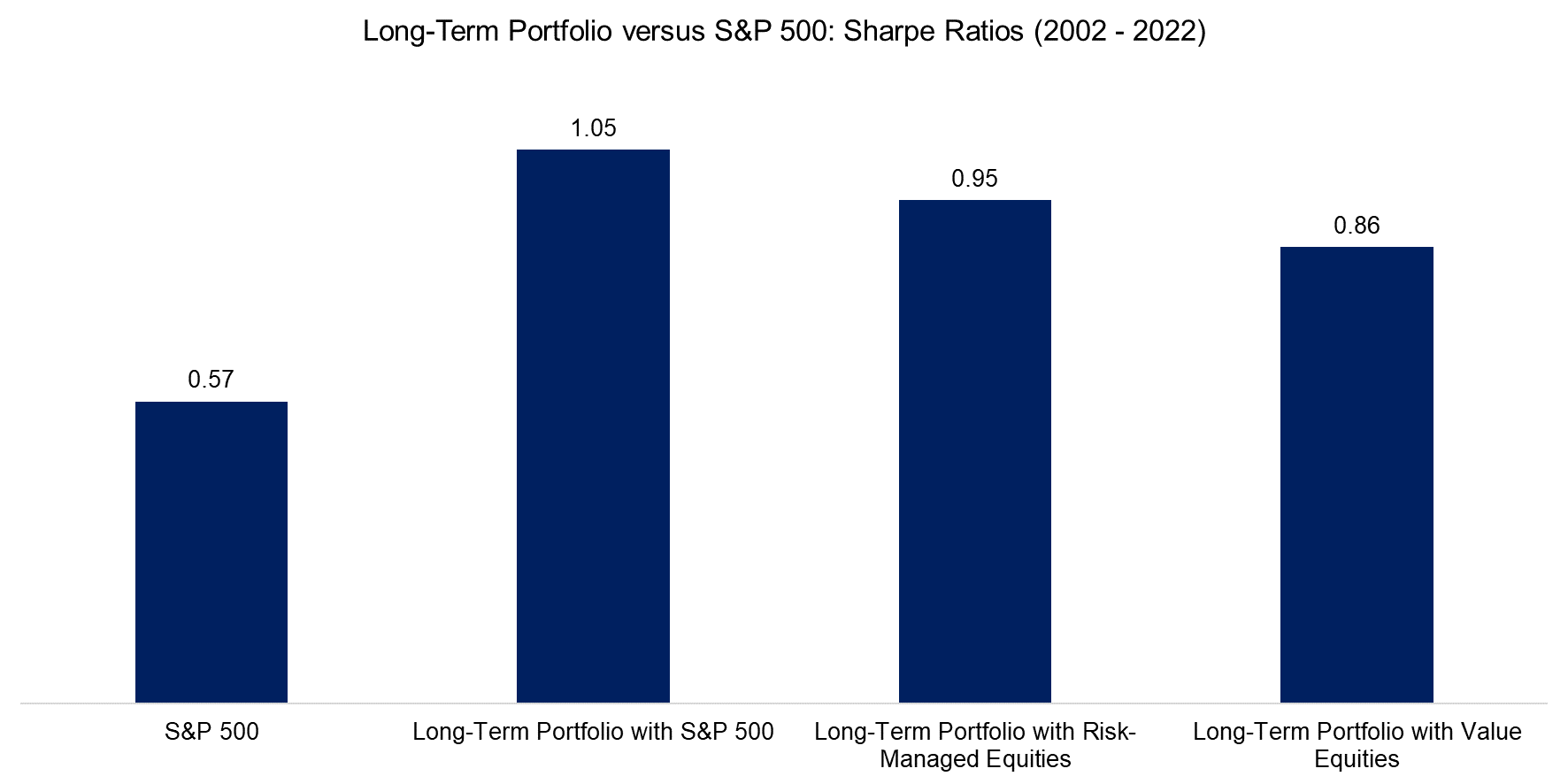 Finally, we compare the maximum drawdowns reached in the period between 2002 and 2022, where cheap equities would have generated almost twice the loss compared to plain-vanilla or risk-managed exposure to the S&P 500. 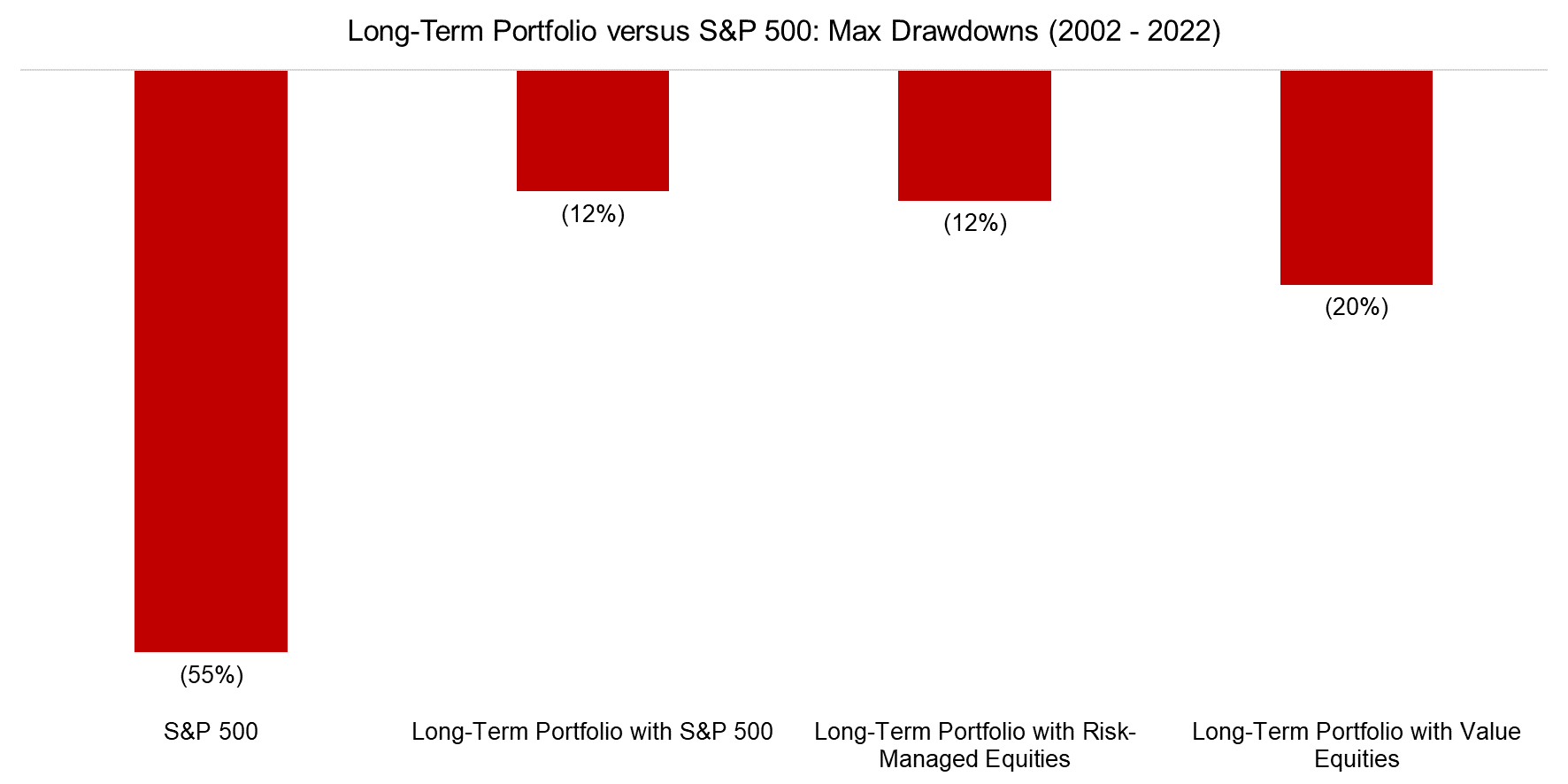 The world is slowly entering a new age as the global population ages. The change is gradual and impossible to perceive on a daily basis. However, the data is readily available and the projections are difficult to refute.

There is a small risk to this thesis – reversing or stopping the ageing process. Although this would lead to a larger or stable population, it is far better than the current scenario. Either way, investors should be prepared and focus on looking forward rather than backward, even if it does imply radical changes to the asset allocation mix. Fortune favours the brave.