Is it sustainable investing?

News about the environment is usually bad. Once in a while, we might see a fascinating video on LinkedIn about wolves being back in the Yellowstone National Park in the US and rejuvenating the local ecosystem, but most posts and articles are about destructive events like earthquakes, floods or tornados.

However, given that these events rarely affect us directly, we often, unfortunately, do not care too much about them. 2022 is different as food prices have been rising globally, which can be attributed to the invasion of Ukraine, one of the largest agricultural and fertiliser producers, and extreme droughts in the US, Mexico, Europe and other markets.

Both represent man-made disasters, where the former can be attributed to a single person – for example the Russian president Vladimir Putin – while the latter is borne by almost all of us as we have been contributing to global warming. Fortunately, investors, if they want to, can contribute to battling both issues, for example, by selling Russian financial assets and allocating to ESG funds.

More mercenary investors who believe global warming will accelerate and the environmental situation will worsen, can invest in carbon credits, which should become more valuable in such a scenario. However, carbon trading is a complicated space with unique nuances, which we will explore in this research article.

The carbon credit market is complicated as carbon gets traded via emission trading systems (ETS) in several countries and the price varies dramatically across these. For example, the price per tonne is EUR 84 in Europe currently, but only EUR 12 in South Korea.

A carbon emitter like an airline company can either implement processes to reduce their carbon emissions or buy carbon credits on the market. Given different jurisdictions, there are different rules that result in heterogeneous prices. 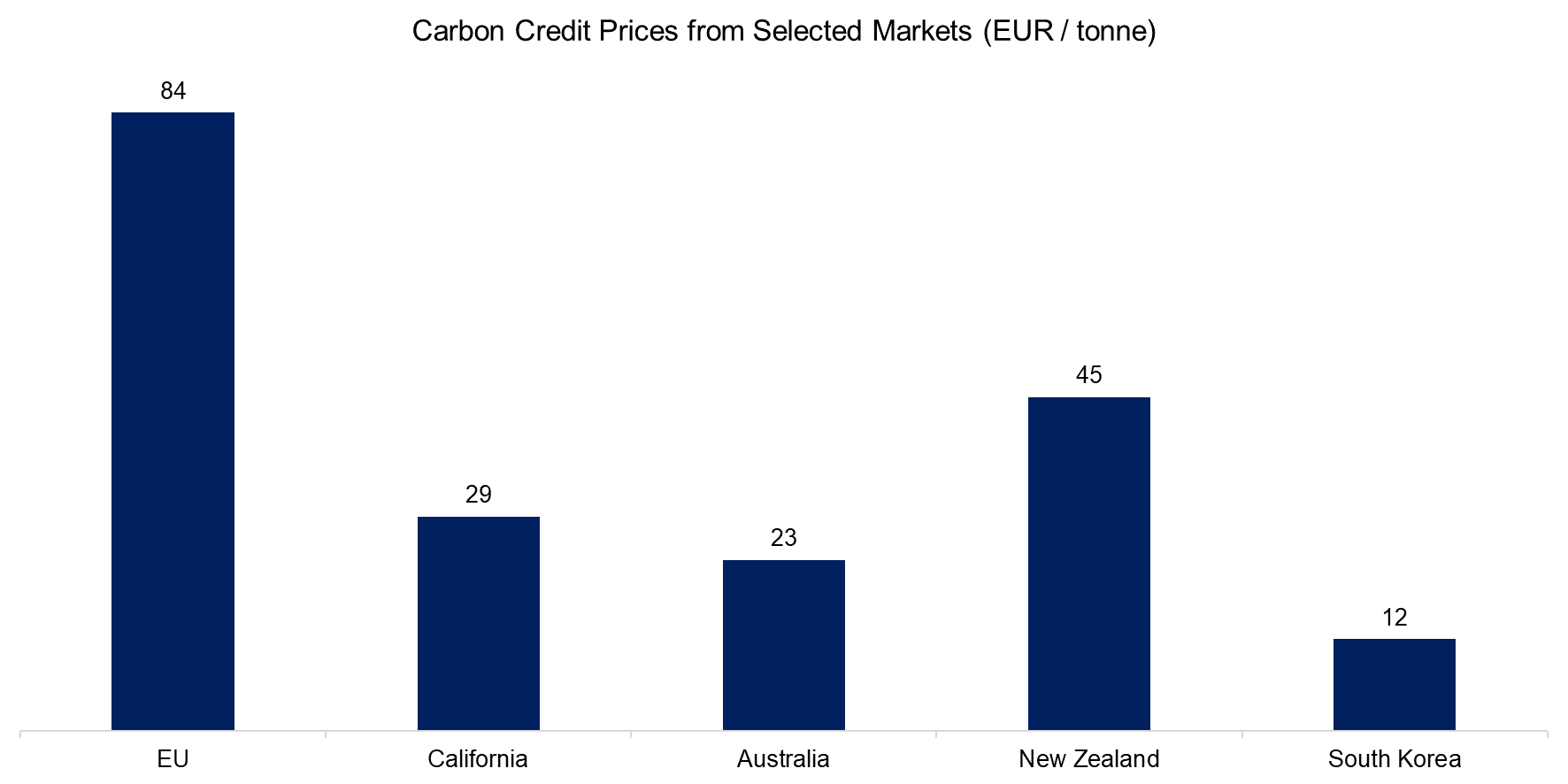 From 2008 to 2018, the carbon price ranged between EUR 10 and 20. An all-time low was reached in 2013 at EUR 3 per tonne, while the highest price was reached in February of this year at EUR 97. The recent rapid increase in prices can partially be attributed to resolving cross-border issues when trading carbon and adopting new rules to accelerate the fight against global warming, for example, at the COP26 event in Glasgow in 2021.

We can also analyse the trading volume of EU carbon credits, which was highly volatile with a few dramatic spikes. Somewhat surprisingly, the volume has been decreasing in 2022, despite the carbon price still being significantly higher than in previous years. This would indicate only a moderate interest from carbon issuers or speculators, despite the increased attention to global warming.

This is even more perplexing when considering the consensus view that the demand for carbon will increase significantly. EY, a consultancy, expects the price for US carbon credits to increase from $25 to between $80 and $150, and the volume to jump at least 20-fold by 2035. 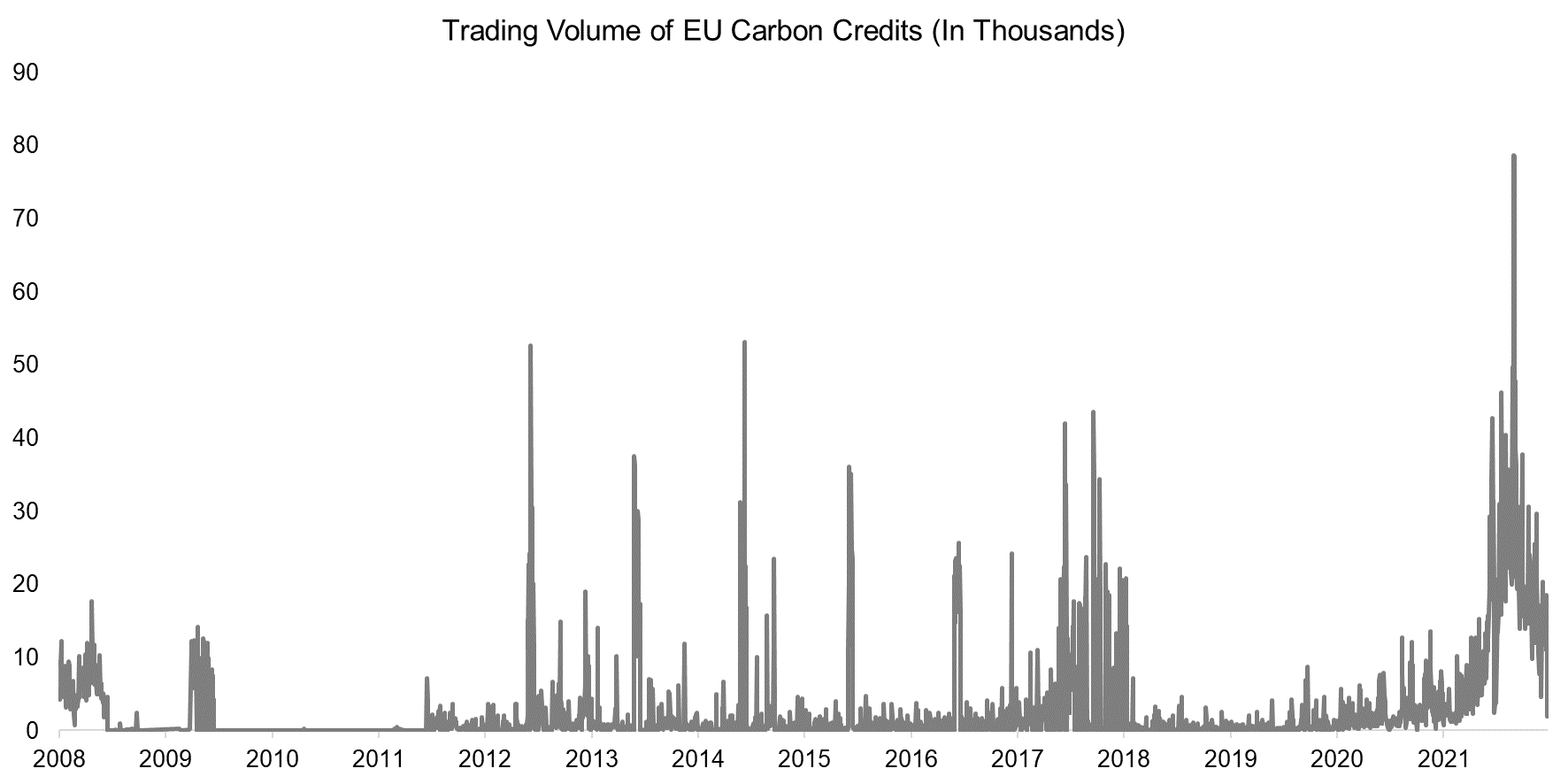 We focus on ETFs and ETNs trading in the US market that provide exposure to carbon dioxide (CO2) credits or allowances, which is a universe of only 5 instruments currently. The combined assets under management are only $1.5bn, where the KraneShares Global Carbon Strategy ETF (KRBN) dominates with an 80% market share. The fees are high with 0.79% on average but in line with similar thematic products.

There are also two ETFs listed in Europe, the WisdomTree Carbon (CARB) and the SparkChange Physical Carbon EUA ETC (CO2).

Given the diversity of carbon credits, ETF issuers have launched products for the US (California), Europe, and the world. The correlation between the markets is not particularly high – 0.3 for European and US carbon credits – which reflects the divergent evolution of local regulations.

Although countries may sign legally-binding agreements on climate change such as the Paris Agreement in 2015, these can be negated by new leadership like when Trump withdrew from the agreement in 2017. 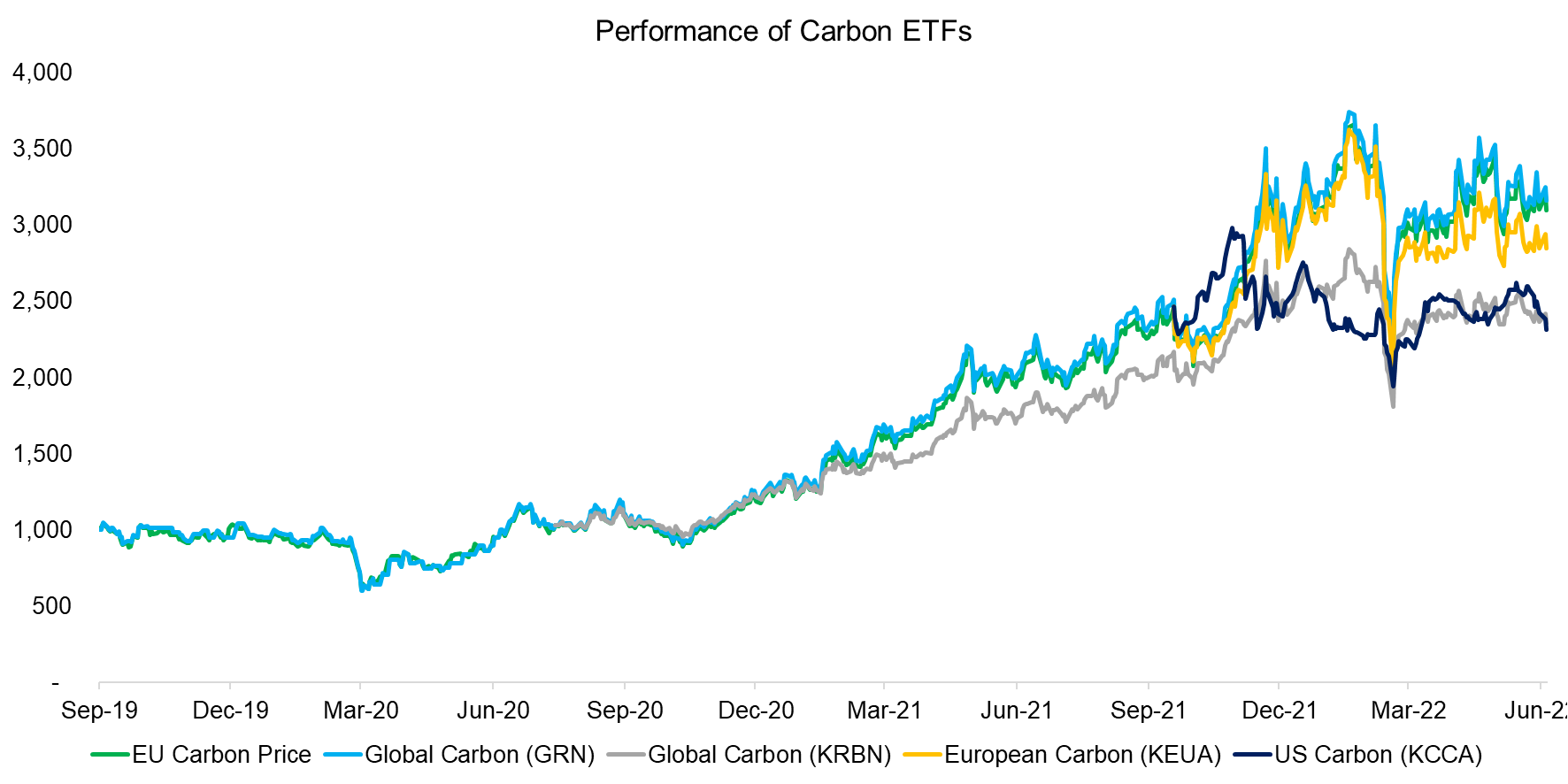 Carbon credits represent a commodity like oil or gas that can be traded directly via futures, or indirectly via ETFs and ETNs. Although some commodities are correlated to the business cycle, many of them are not and are uncorrelated to stock markets, which theoretically makes them attractive candidates for portfolio diversification.

The largest impact on the carbon credit price is regulation rather than the global economy. Given this, the correlation to the stock markets as represented by the S&P 500 was only 0.1 in the period between 2008 and 2022.

Although carbon credits are attractive from a diversification perspective given the low correlation to stocks, adding an allocation as a long-term holding is unlikely a wise strategy. Commodity prices have been declining over the long term as our technologies continue to evolve and improve our lives and the global economy. We can expect the same for carbon prices.

Naturally, there will be bull and bear markets in commodities, which includes carbon credits, but it is more sensible to exploit these via trend following than long-only strategies.

Have you seen our new ETF data tool?

Just click on any of the ETF links in the article above and you will get access to a whole host of data including:

Please note: The tool is provided by ETF Logic who shall process your personal data in accordance with their privacy policy.