One enemy but an arsenal of weapons

In this year, most developed markets have been experiencing inflation last seen decades ago, with the exception of Japan. In October 2021, the land of the rising sun had only a 0.1% change in prices, compared to a whopping 6.2% in the US. Consumers are angry, central bankers seem confused and investors appear wary.

Theoretically, higher inflation should lead to higher interest rates, which makes fixed income a more attractive asset class again. Paying the German government 0.3% for the next 10 years on their treasury note is hardly a desirable investment.

However, higher interest rates will devalue existing bond positions and lead to higher discount rates, which should lead to lower valuations of stocks. The counterargument is that higher inflation is partially explained by higher economic growth, which should be positive for corporate earnings.

Leaving economics aside, where theory and reality clash consistently, investors are concerned about rising interest rates. The ETF industry has launched a variety of products that may serve to hedge against, or even benefit from rising rates.

In this research note, we will explore ETFs that supposedly benefit from higher interest rates.

Our typical approach to selecting ETFs for a certain theme is going by their product names as that is what most investors tend to do. However, there are only a few ETFs in the US that seem to address rising interest rates going by their names.

Instead, we will focus on a variety of ETFs that often appear in the financial media in relation to rising interest rates. Many of these provide some income but the reason for these to benefit from rising rates are quite diverse:

Some of these ETFs are relatively new, while others were among the first ETFs that came to the market. The time since launch does have an impact on the commercial success as measured by the assets under management, which highlights an ETF market that has become crowded. 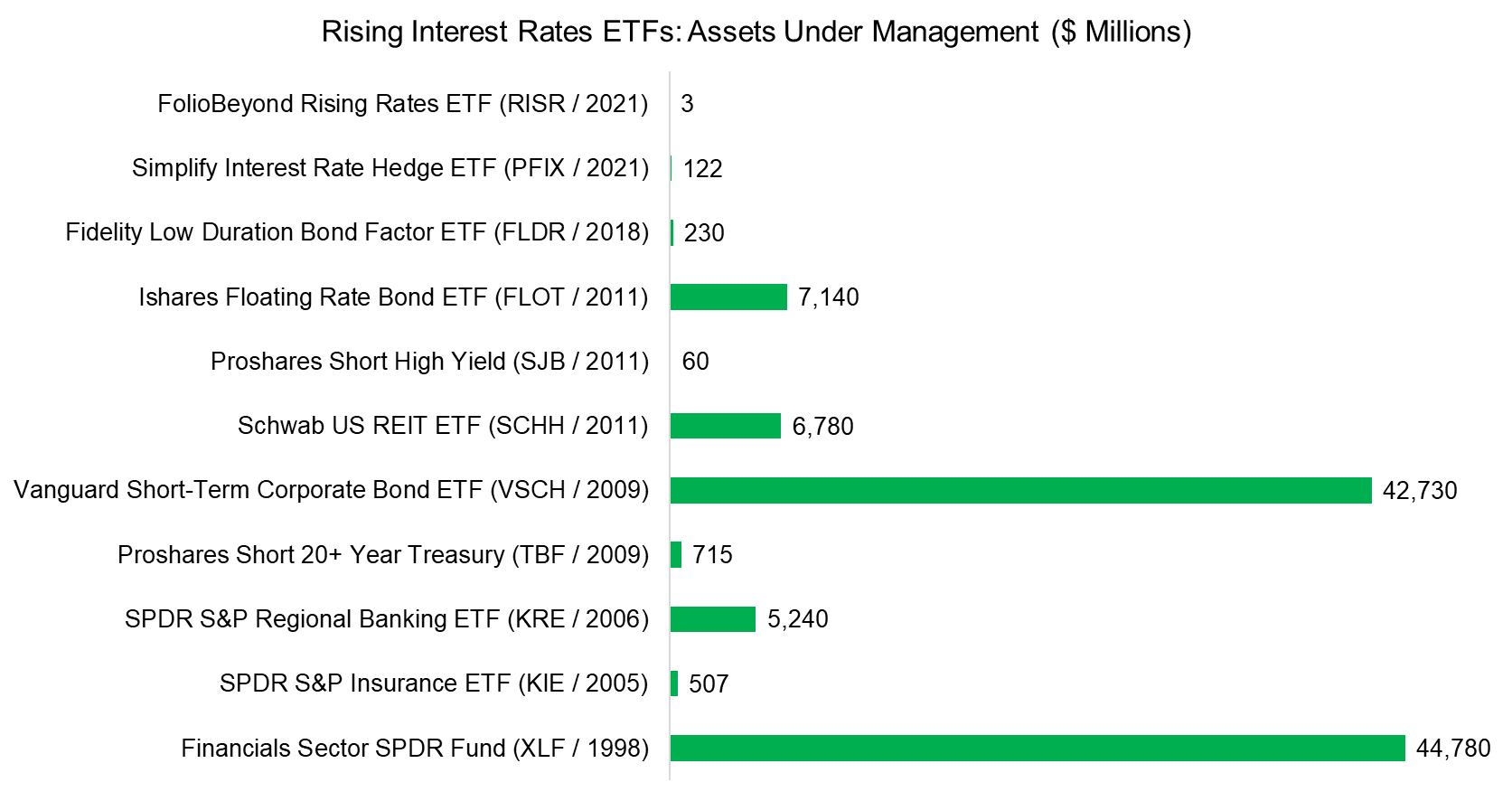 Typical for ETFs, there is an inverse relationship between fees and assets under management, eg the two ETFs with the lowest fees manage most assets. However, it is worth noting that some of the more recent ETF launches like RISR feature relatively high fees, where the asset manager is betting that its unique strategy justifies these. 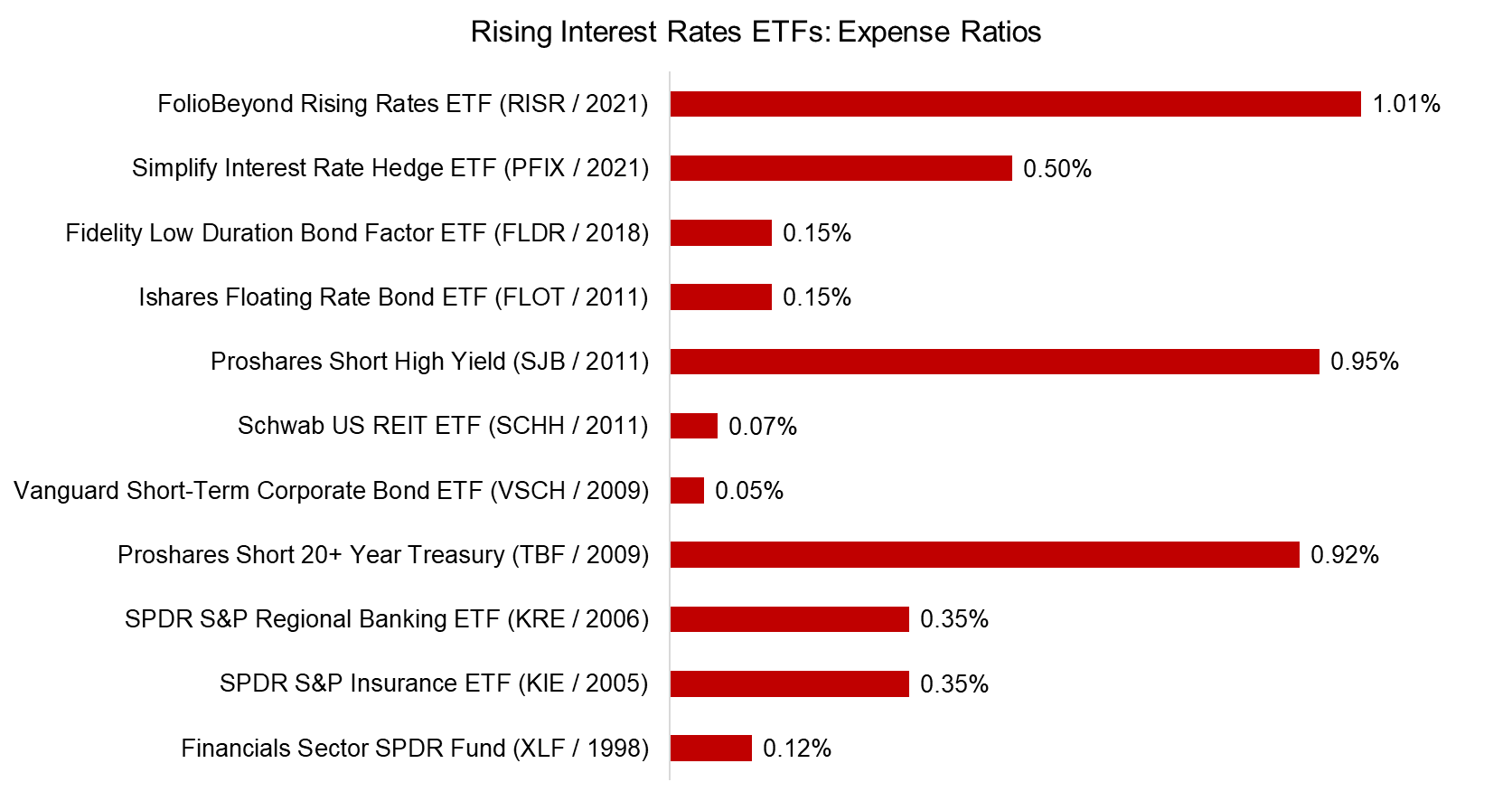 Reviewing the performance of these ETFs underlines their different strategies. Broadly speaking we can categorize the ETFs into three groups: equity-focused, fixed income, and short fixed income strategies.

It is worth highlighting that TBF has declined approximately 70% in value since its launch in 2009, but still manages more than $700m assets. The returns have been consistently negative given declining government bond yields, which typically leads to redemptions and ultimately the liquidation of the product, but this ETF shows that useful strategies can be commercially successful even with poor returns. 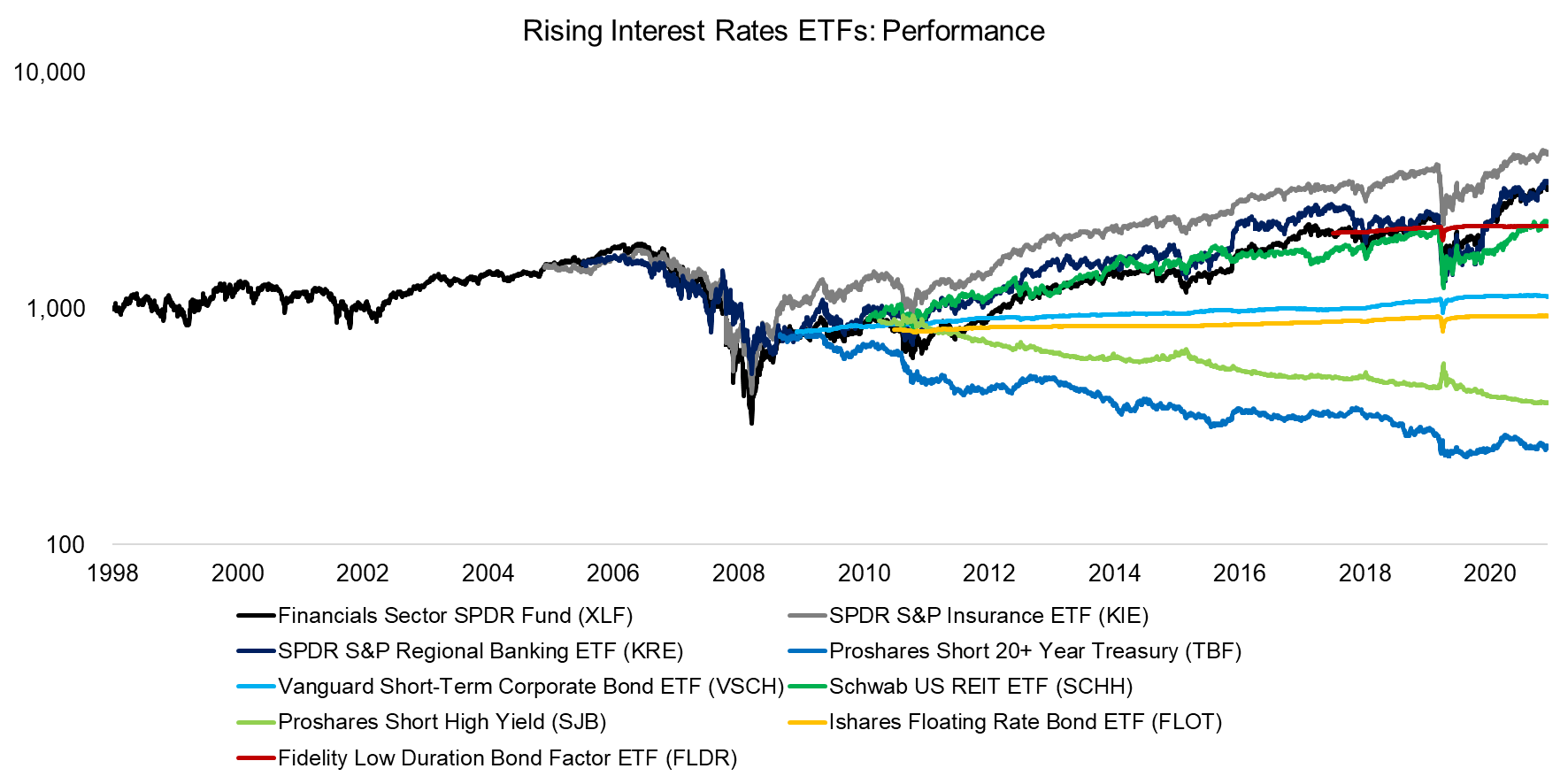 Source: FactorResearch. We exclude RISR and PFIX given a trading history of less than one year.

In order to get a better understanding of the diverse strategies, we run a factor exposure analysis on each of the ETFs. As expected, this shows high equity exposure for XLF, KIE, KRE, and SCHH, which are all stock-based portfolios. SCHH also has bond exposure that is explained by the hybrid nature of real estate. KRE has significant exposure to equity factors, specifically the size and value factors. 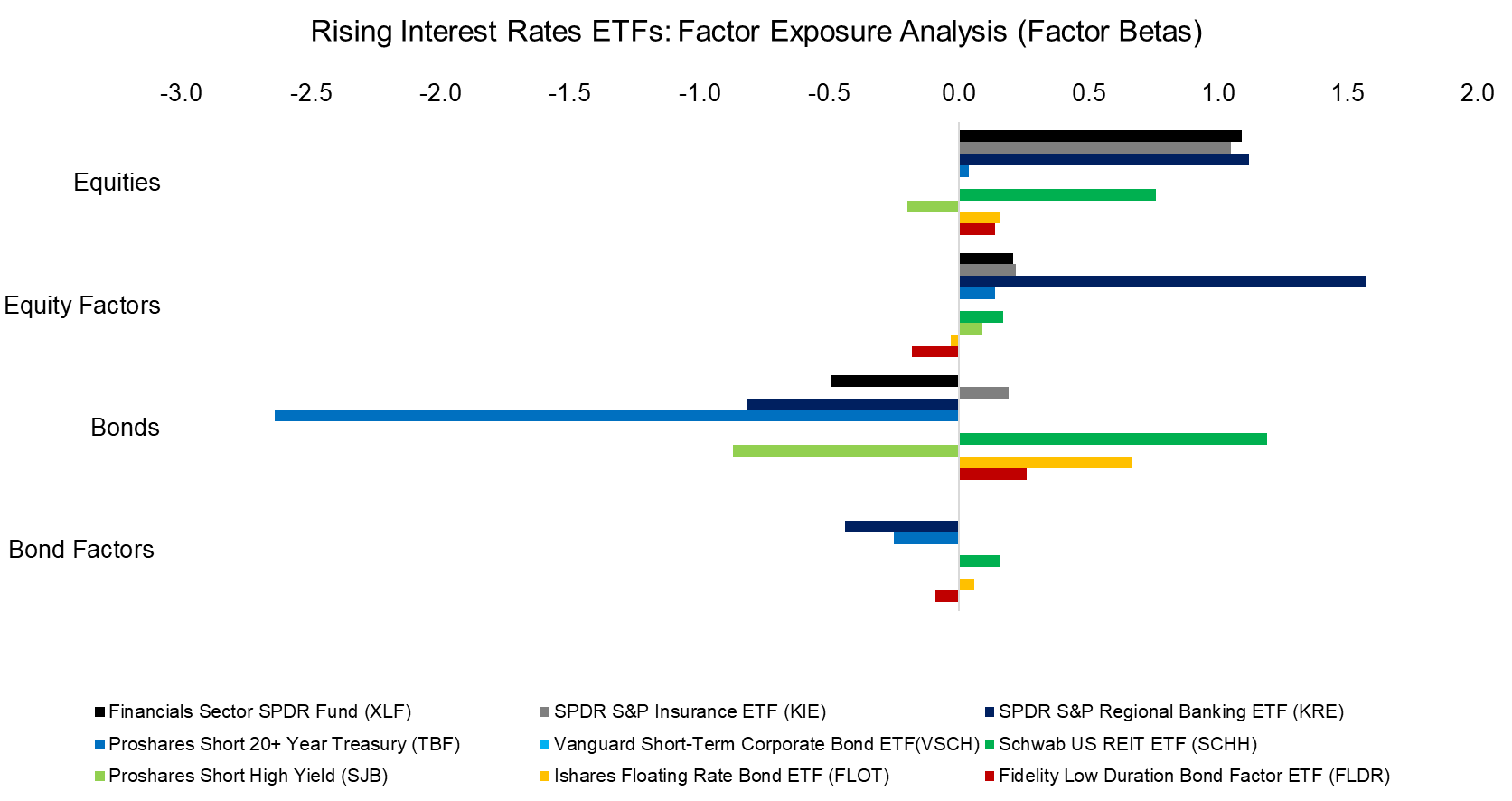 Although it is interesting to analyse the performance and factor exposure of these ETFs, it can be argued that the only relevant metric is their correlation to bond yields. If the correlation is positive, then the ETF will benefit from rising interest rates, although also suffer from declining rates. 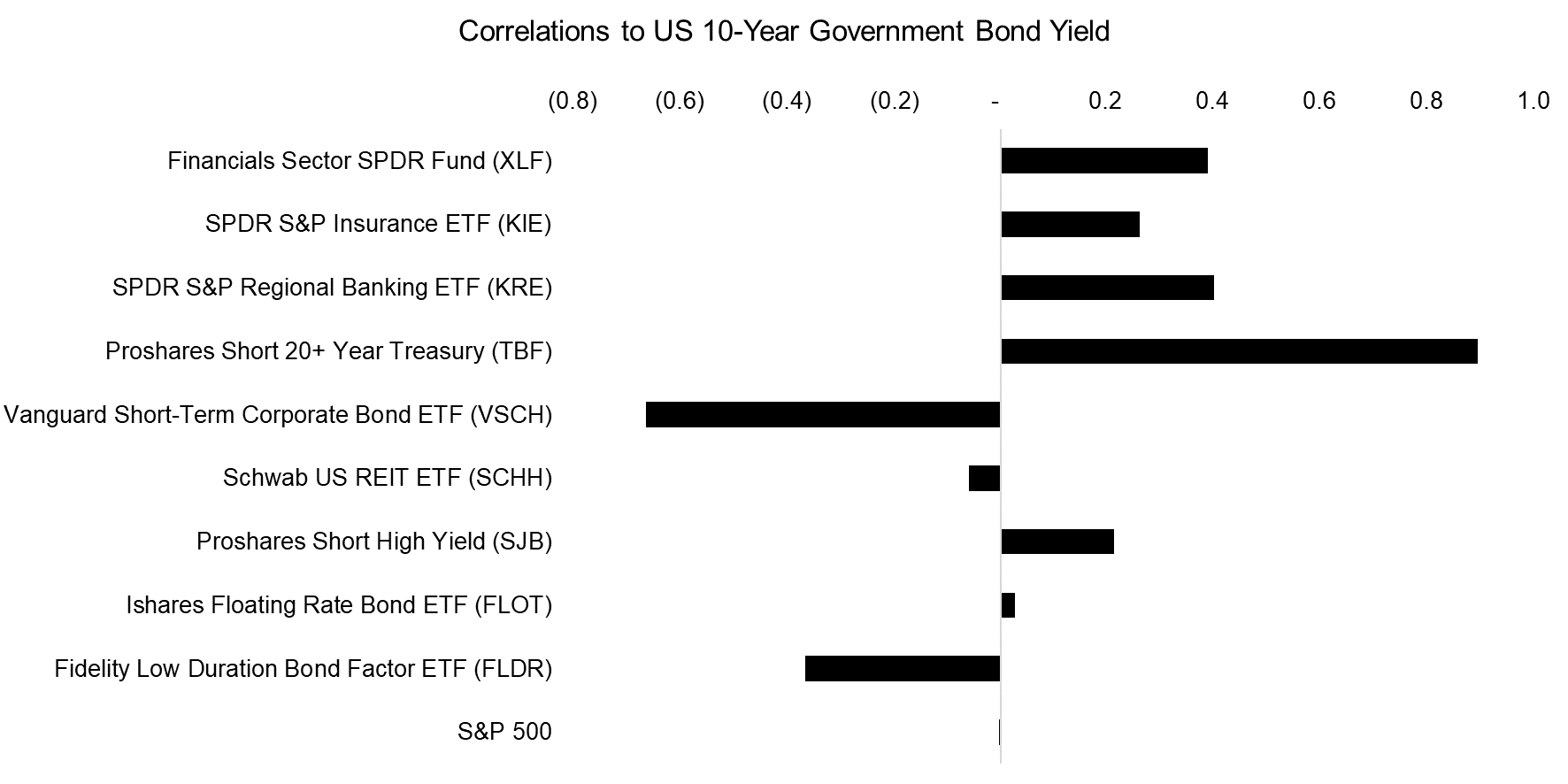 Based on this simple analysis, many of the ETFs that are marketed as interest rate beneficiaries seem to have less favourable characteristics than desired. However, measuring the relationship with interest rates can be done in various ways and correlation alone may provide a misleading perspective, i.e. TIPS have a low correlation to inflation but are still regarded as suitable instruments for hedging against it.

Furthermore, investors may not only want directional bets on interest rates, ie products that benefit from rising and suffer from declining yields. Some of the newer products focus on providing convexity, which may be more interesting within an asset allocation framework. Given the interest in the theme and crowded ETF space, we will likely see more sophisticated products coming to the market.

Have you seen our new ETF data tool?

Just click on any of the ETF links in the article above and you will get access to a whole host of data including:

Please note: The tool is provided by ETF Logic who shall process your personal data in accordance with their privacy policy.