Myth-busting: Earnings do not matter much for stock returns

If earnings do not matter, what does then?

What drives stock returns? Earnings, right? So, what drives earnings? Likely economic growth. After all, it is much harder for companies to expand their sales and profits in a sputtering economy.

However, the relationship between equity returns and economic growth is more illusion than reality. It may make logical sense, but there is little actual data to support it.

For example, China’s economy has expanded at a pretty consistent and impressive pace, about 10% per year, since 1990. That should have provided ideal conditions for Chinese stocks to flourish and generate attractive returns. But investing in Chinese equities was not such a smooth ride. The Shanghai Composite index is up since 1990, but the trajectory has been anything but consistent, with multiple 50% drawdowns.

This lack of correlation has a simple explanation. The Chinese stock market has been historically dominated by largely unprofitable state-owned enterprises (SOEs) and has not reflected the otherwise highly dynamic economy.

But China is hardly an outlier. Elroy Dimson, Jay R. Ritter, and other researchers have demonstrated that the relationship between economic growth and stock returns was weak, if not negative, almost everywhere. They studied developed and emerging markets across the entire 20th century and provide evidence that is difficult to refute.

Their results suggest that the connection so often made between economic developments and stock market movements by stock analysts, fund managers, and the financial media is largely erroneous.

But what about earnings driving stock returns? Does that relationship still hold true? After all, Finance 101 teaches that a company’s valuation represents its discounted future cash flows. So let’s see if we can at least validate that connection.

To explore the relationship between US stock market returns and earnings growth, we first calculated the five-year rolling returns of both time series using data from Robert J. Shiller at Yale University going back more than a century. From 1904 to 2020, earnings growth and stock returns moved in tandem over certain time periods, however, there were decades when they completely diverged, as highlighted by a low correlation of 0.2.

The perspective does not change if we switch the rolling return calculation window to one or 10 years, or if we use real rather than nominal stock market prices and earnings. The correlation between US stock market returns and earnings growth was essentially zero over the last century. 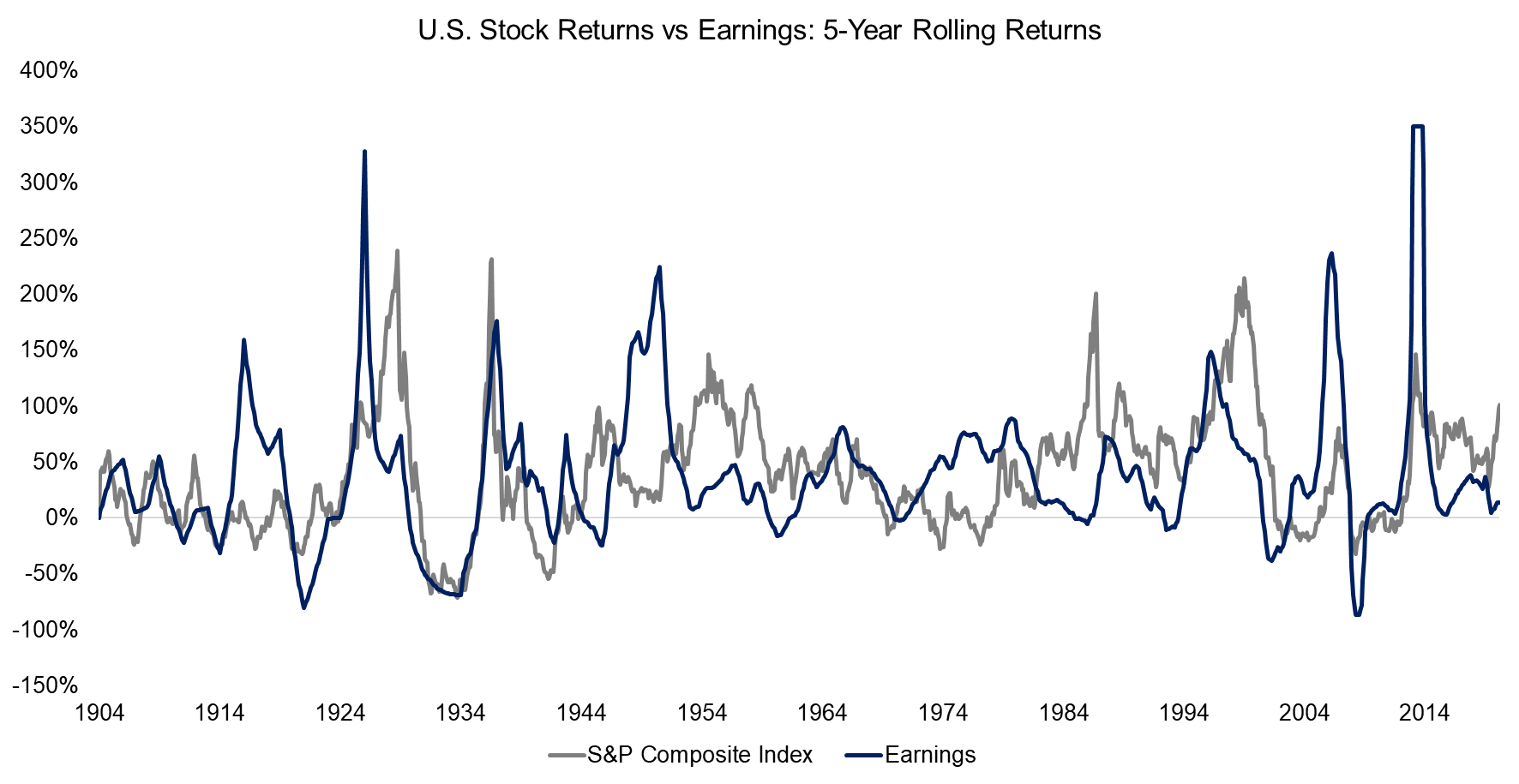 Perhaps the lack of correlation between stock returns and earnings growth is because investors focus on expected rather than current growth. Valuing a company is based on discounting future cashflows after all.

We tested this hypothesis by focusing on earnings growth for the next 12 months and assume investors are perfect forecasters of the earnings of US stocks. We treat them as super investors. 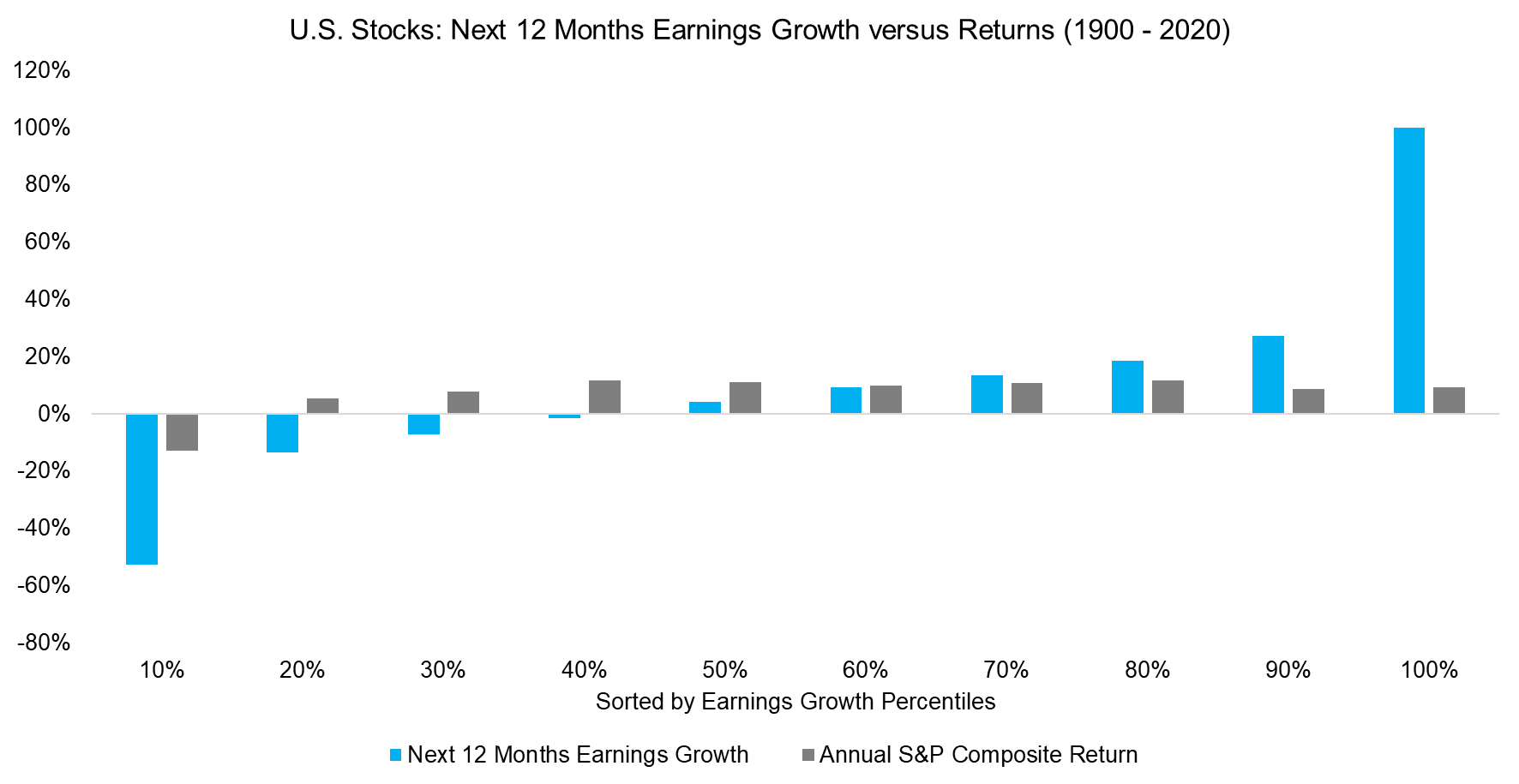 We can extend this analysis by investigating the relationship between earnings growth and P/E ratios. Rationally, there should be a strong positive correlation as investors reward high-growth stocks with high multiples and penalise low-growth stocks with low ones. Growth investors have repeated this mantra to explain the extreme valuations of technology stocks like Amazon or Netflix.

Again, the data does not support such a relationship. The average P/E ratio was indifferent to the expected earnings growth rate over the next 12 months. Indeed, the higher forward growth resulted in P/E multiples slightly below the average.

If the focus was current earnings, our explanation might be that an increase in earnings leads to an automatic reduction in the P/E ratio. But with forward earnings, these results are less intuitive.

Why do earnings matter so little to stock market returns?

The simple explanation is that investors are irrational and stock markets are not perfect discounting machines. Animal spirits matter as much if not more than fundamentals. The tech bubble of the late 1990s and early 2000s is a great example of this. Many high-flying companies of that era like Pets.com or Webvan had negative earnings but soaring stock prices.

Does this mean investors should disregard earnings altogether?

Many already do. Millennials, in particular, made big bets on GameStop, for example, and some hedge fund managers pursue momentum strategies. And while the former hardly seems like sound investing, the latter is a perfectly acceptable strategy that does not require any earnings data.

So while earnings should not be totally disregarded, neither should investors assume they are the driver of stock returns.