London ranks ninth on the UBS Global Real Estate Bubble index for residential properties. Like in many other countries, property prices in the UK reached an all-time high in 2020. A global pandemic with sudden mass unemployment should have forced UK citizens to sell their homes, but the furlough policies, stamp duty holidays, and record-low interest rates more than counterbalanced that.

A two-bedroom apartment with 1,000 square feet of living space in a posh neighbourhood like Hampstead in North West London costs about £1.5 million. The rent is approximately £3,000 per month, which equates to a measly gross rental yield of 2.4%. After accounting for maintenance and taxes, it’s more like 1.7%. Many of the houses in that area are more than a century old and need lots of love.

Although such a low yield may seem unattractive to buy-to-let owners, it was considerably worse throughout most of the last decade when the cost of financing was above the rental yield. Buyers were purely betting on price appreciation and willing to accept negative cash flow during their investment period.

Now, thanks to COVID-19 and the Bank of England (BOE), financing costs are less than the rental income, and the cash flow of property investors has turned positive. For those considering buying a property for their own use, paying interest and amortisation is now often cheaper than renting. What an odd world.

But buying an apartment in neighbourhoods like Hampstead tends to require at least 25% of equity as banks have become more conservative since the global financial crisis (GFC). If a potential buyer was successful enough to save about several hundred thousand pounds for a down payment, they will still need to eventually repay the £1.1-million loan. From a pre-tax perspective, this implies almost twice the amount of money that needs to be earned.

Some potential buyers are actively betting on inflation to help reduce the debt load over time. The theory is that all the monetary and fiscal policies of the last decade will lead to higher inflation. Income and real asset valuations should increase along with inflation, but the loan amount stays the same and erodes in real terms.

Is this the wishful thinking of property speculators or does the data support the theory?

Central banks are often credited with saving the world with their aggressive monetary stimulus during the GFC in 2008. But the crisis is more than a decade behind us and the same basic policies are still in place. Central bank balance sheets keep on expanding. In countries like Germany, this continuous money printing is viewed with pure horror given its association with the hyperinflation of the Weimar Republic in the 1920s.

With the COVID-19 crisis, the central banks have kicked their money printing into an even higher gear. The US Federal Reserve’s balance sheet has breached $7trn, which is comparable to the European Central Bank (ECB)’s €7trn. The central banks seem to have chained themselves to the public markets and feel forced to step in each time stocks drop meaningfully.

The unnatural consequences of this behaviour are becoming more and more obvious. For example, the Bank of Japan (BOJ) owns more than 75% of the ETFs domiciled there. 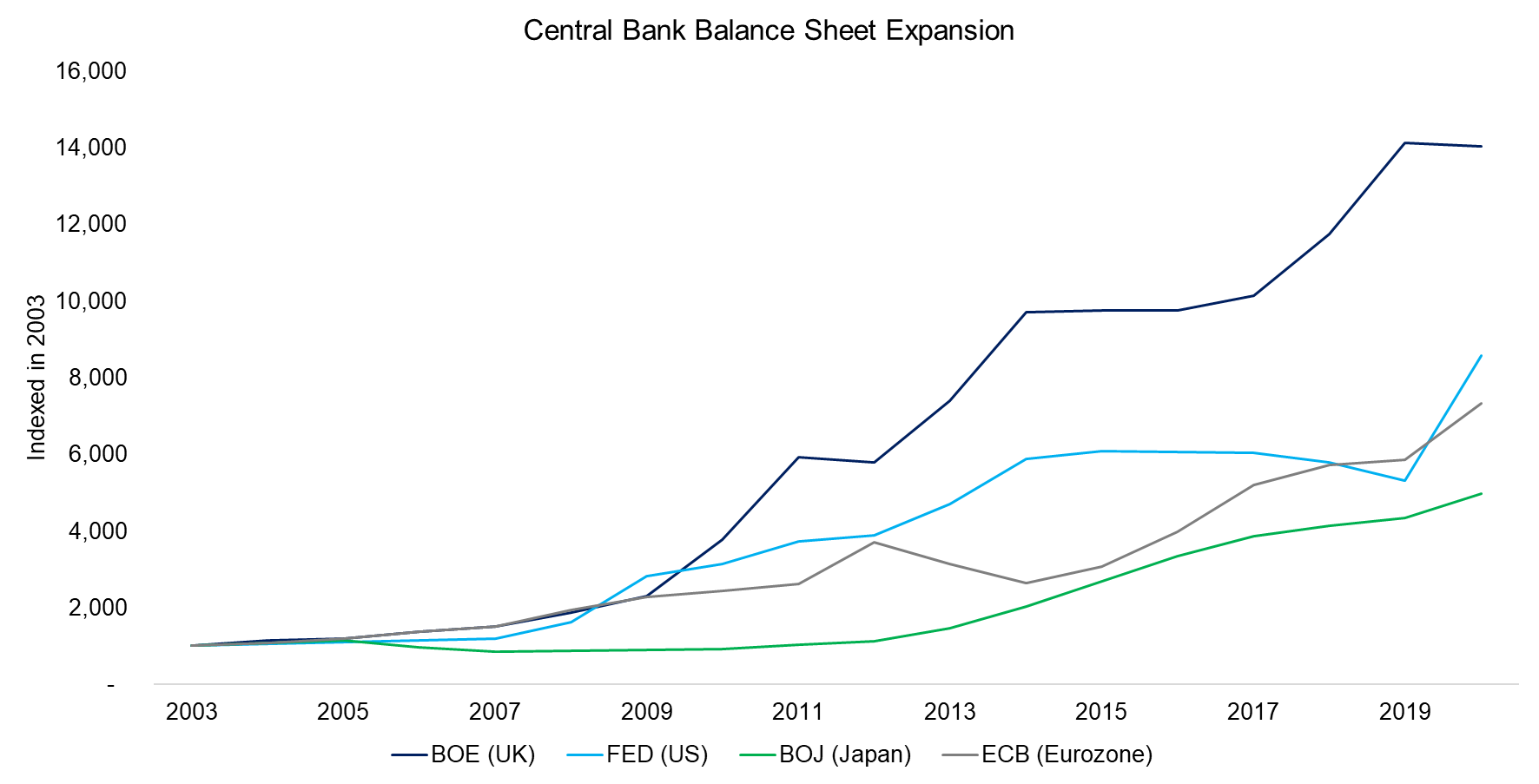 There are various metrics to measure the money supply. M1 represents all the physical money in circulation, both in cash and in checking accounts, and has been trending lower in the United States, Europe, United Kingdom, and Japan since the 1980s.

None of the monetary stimulus conducted since 2009 has influenced money circulation. That holds true even with broader money supply measures like M2 or M3 that include savings deposits and money market mutual funds.

In 2020, the US government issued COVID-19 stimulus checks which significantly affected M1 by vastly increasing the cash in circulation. The UK and EU governments responded differently and did not issue direct cash payments to their citizens, so M1 in these countries remained the same. 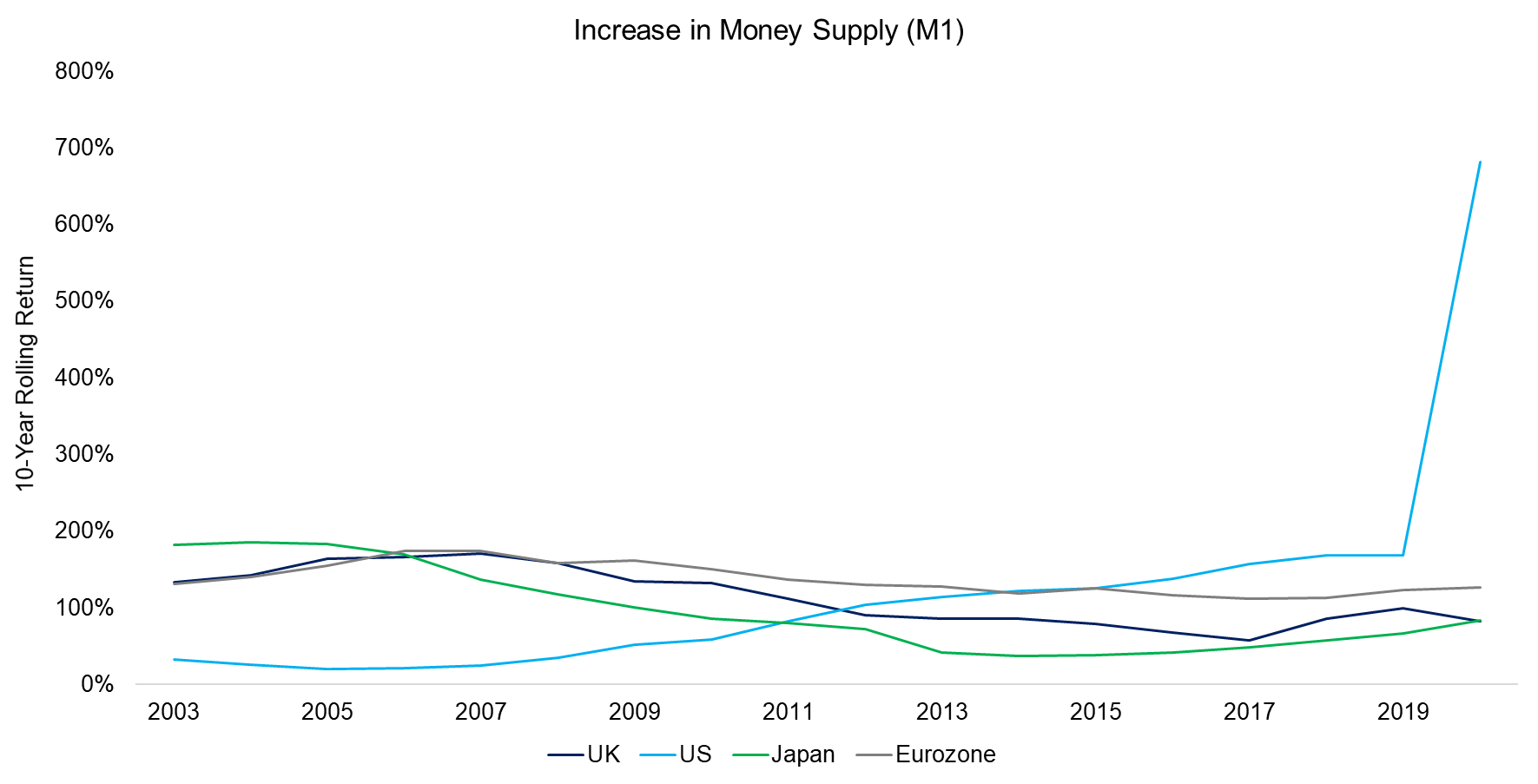 Japan offers compelling insights into the relationship between central bank balance sheets, money supply, and inflation. The Japanese government and central bank have been at the forefront of monetary policy experimentation since Japan’s economy tanked in the 1990s after epic bubbles in stocks and real estate.

Today, Japan’s economy is fighting demographic headwinds, but the goals of the government and central bank have remained the same: create moderate inflation and positive economic growth.

After calculating the 10-year rolling returns of the central bank balance sheet, M1 money supply, and inflation, we have three observations:

Intuitively, inflation should follow the money supply. The more money that circulates in an economy, the more demand for products and services, which should lead to higher prices. However, the economy consists of many interrelated variables and linear models frequently fail to represent reality. 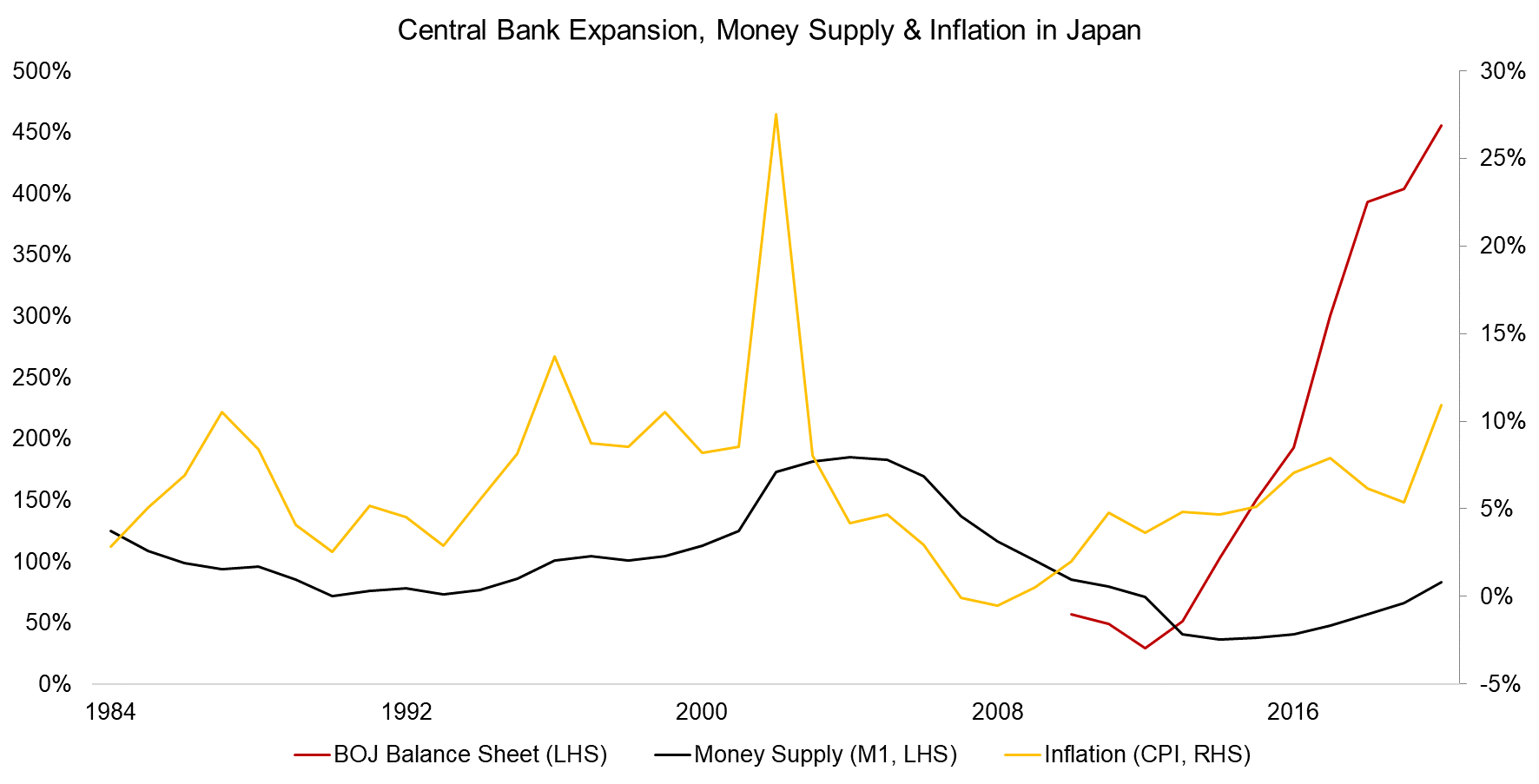 Central bank expansion, money supply and inflation in the US

The same three economic variables in the United States, show the same increase in the central bank balance sheet as in other markets and only muted effects on money supply and inflation. Furthermore, inflation can occur without meaningful changes in the money supply, for example, during the oil crisis in the 1970s.

Some investors are betting on inflation to follow the spike in the money supply in 2020. While this is possible, the money supply has been increasing for more than a decade but inflation has fallen consistently over the same time period. 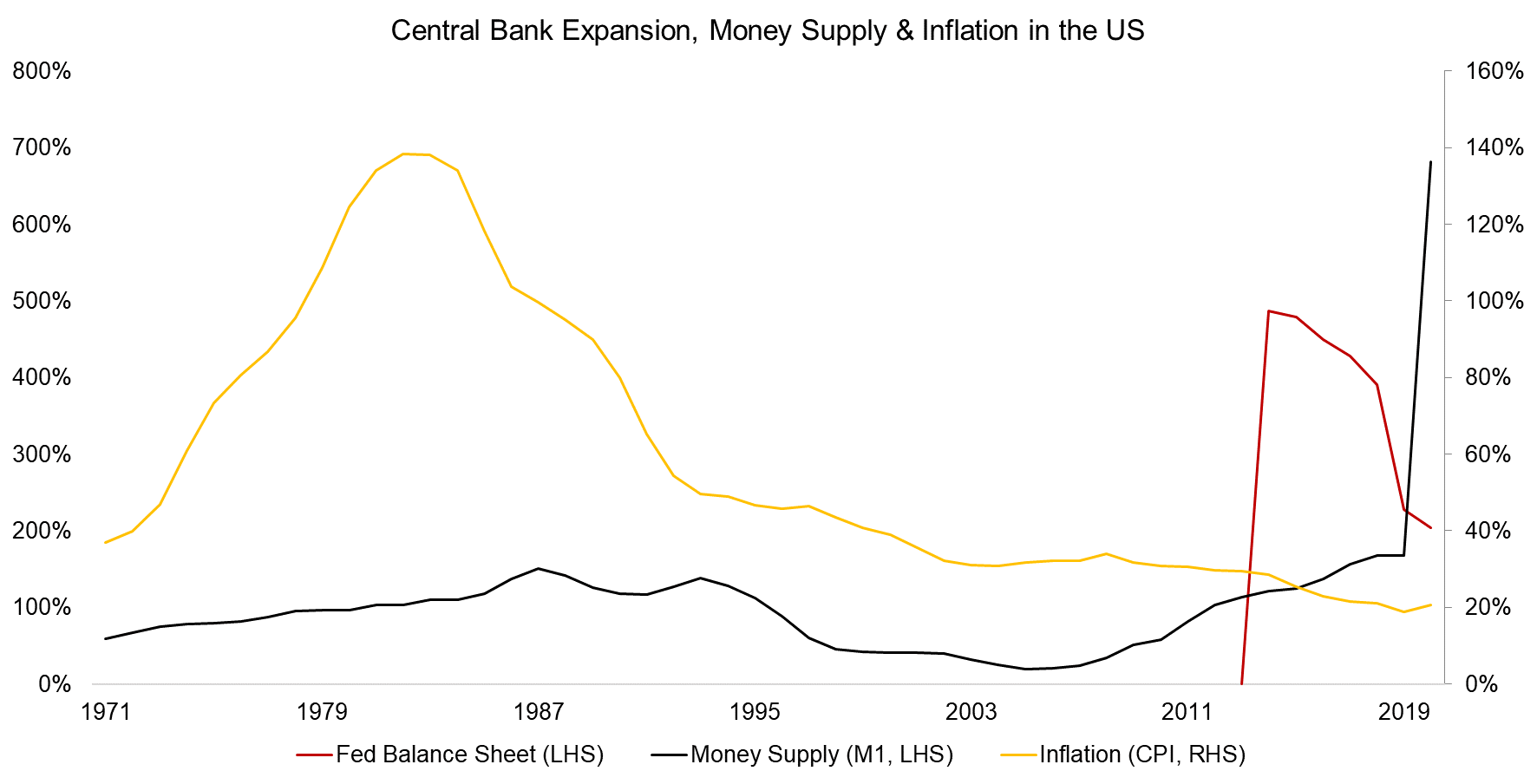 Central bank expansion, money supply and inflation in the UK

The BOE has time series that go back to way before the Middle Ages. It is an El Dorado for economists and financial data aficionados.

The UK data highlights a strong positive correlation between the BOE’s balance sheet, money supply, and inflation between 1947 and 1995. But thereafter, the relationships broke down. Money supply and inflation still moved in tandem, but the central bank activity seemed largely irrelevant.

We are not economists and do not know why these relationships changed. It could be due to the type of central bank activity. Maybe central bank activities used to be directly linked to the money supply while modern policies are more focused on influencing financial markets. 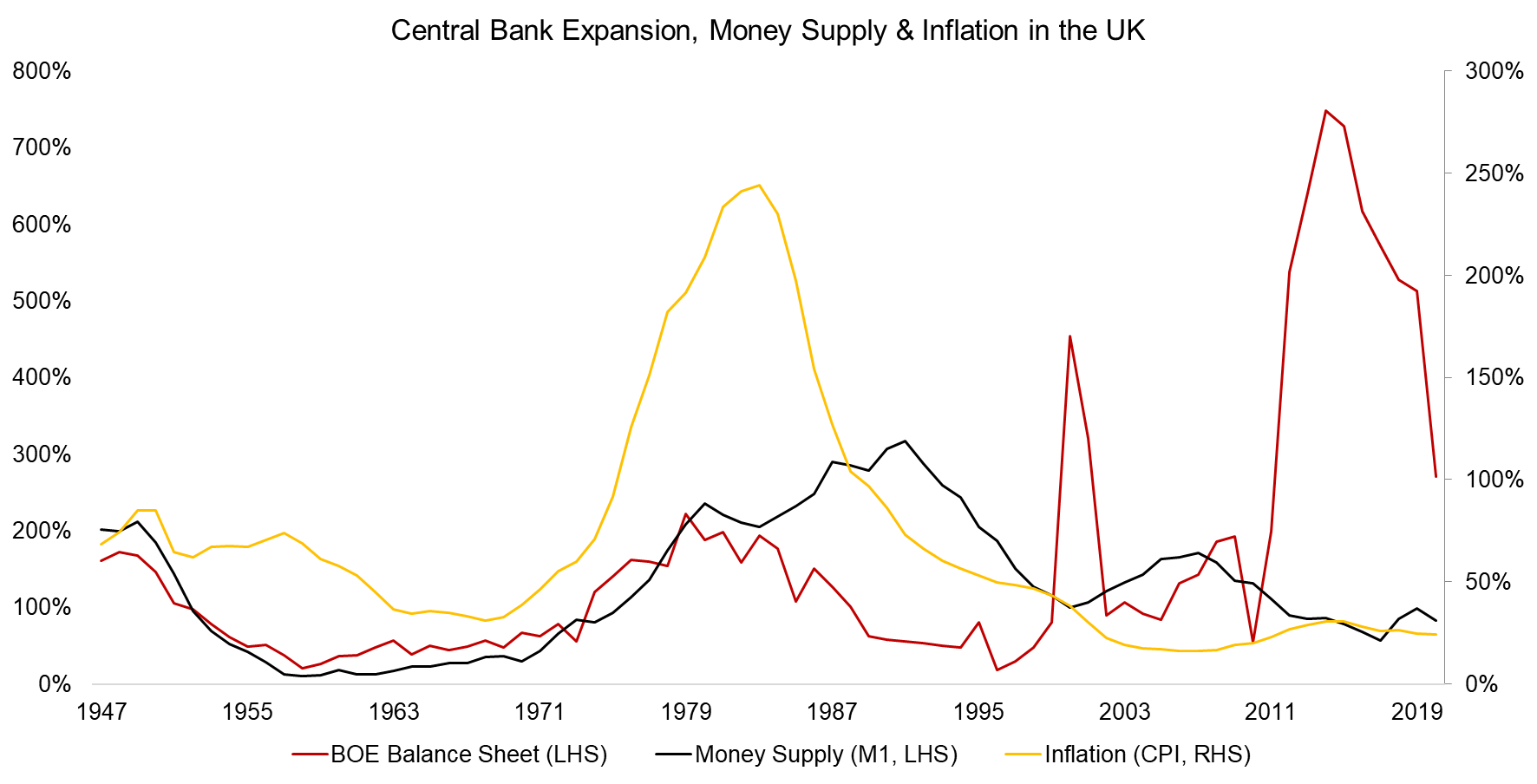 Given their typical mandate to create moderate inflation, the all-powerful central banks seem quite powerless. Or they are simply fighting forces they cannot overcome: namely, the negative demographics and negative productivity growth that contribute to low economic growth.

Should investors worry about the mass money printing by central banks? Certainly. It has distorted financial markets and inflated prices across asset classes. But perhaps this simply leads to lower future returns rather than higher inflation.

Still, if more direct fiscal or monetary stimulus is delivered on an ongoing basis, investors may have greater cause for concern. History shows that this is a recipe for disaster for renters and owners alike.