Can we de-risk market downturns?

It is tough to have high return expectations for stocks for the coming years. Stocks may go up in the short-term, but over the long-term, returns are primarily a function of valuations, which are at record-highs. Worse, the long-term outlook for economic growth is low to negative in most countries due to poor demographics and rising debt levels, which are not supportive of the earnings growth of public companies. The future is bleak.

However, having zero exposure to global equities does not seem like a sensible solution as valuations of all asset classes, public as well as private, are at extremes. Nothing is cheap and as often stated, there is no alternative. A high cash allocation is not advisable with moderate inflation as it implies a negative real return.

Perhaps, an equities allocation can be combined with a risk management overlay that focuses on reducing drawdowns and generating higher risk-adjusted returns. Investors have a large number of tactical asset allocation models at their disposal and we will evaluate one of the most famous and simplest of all – the 200-day trend – in this research note.

Buy-and-hold is not an easy investment strategy

Buy-and-hold has worked well in the US over the last few decades, but not without major hiccups. The Global Financial Crisis in 2009 tested the most hardened investors. In other markets, buy-and-hold was not a viable strategy for most investors. The most well-known example is likely Japan, where the stock market went sideways in the three decades between 1990 and 2021.

Although the Japanese stock market recently surpassed its previous peak from 1990, Japan will lose 16% of its population, a full 21 million people, due to negative demographics over the next 30 years according to the UN. It is difficult seeing how this can be positive for Japanese stocks. 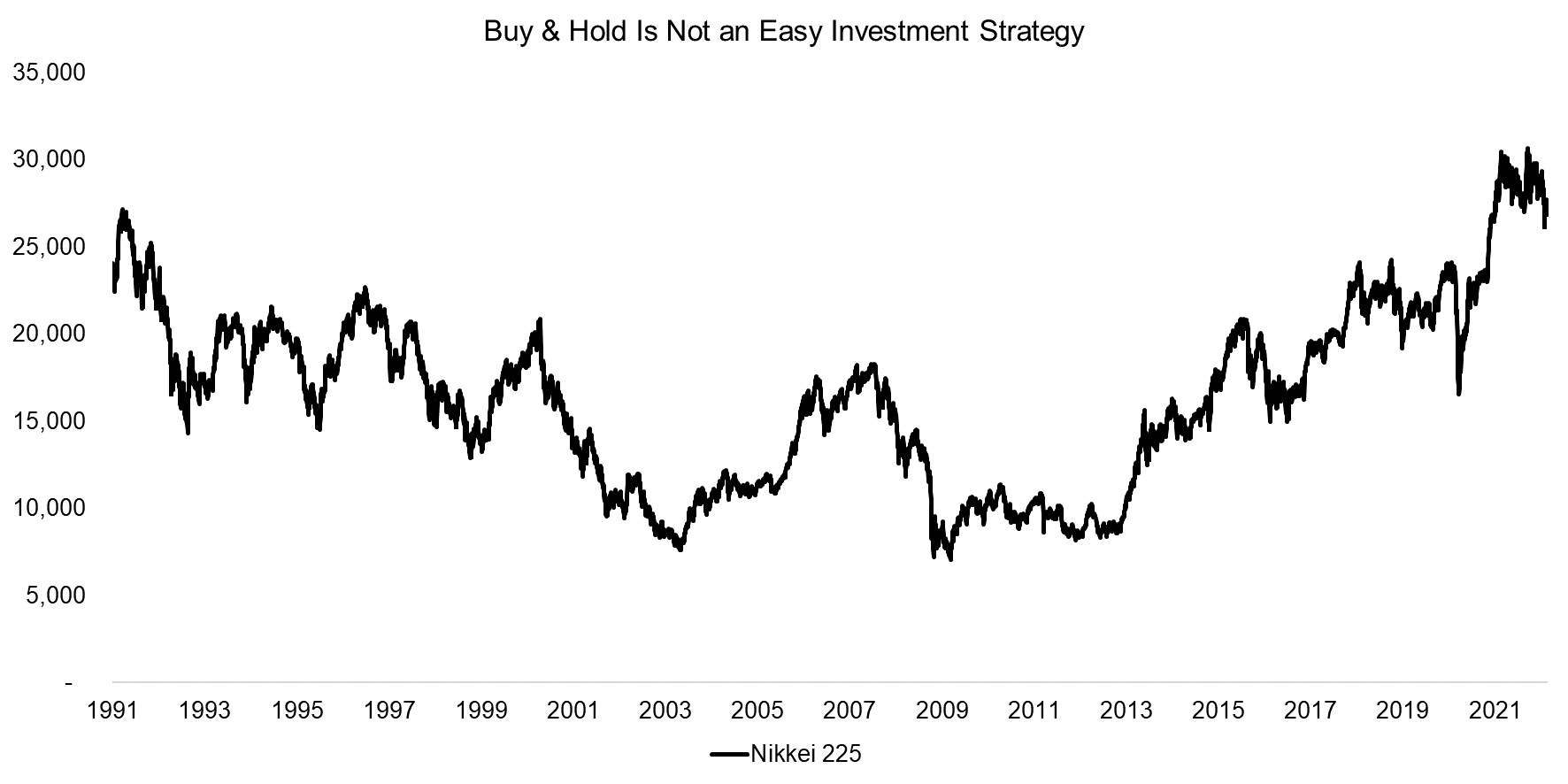 We will use the 200-day trend as the sole metric for deciding between having exposure to equities or cash, ie if positive, have exposure to stocks, if negative, go to cash. In order to make the implementation realistic, we assume trading with a day delay to the signal. We exclude transaction costs, which overstates the older returns, but the more recent ones as the cost for buying market exposure via futures or ETFs has fallen to almost zero.

We simulate the performance of applying the simple risk management strategy to the US stock market, where we have data going back to 1926, ie almost a complete century. Specifically, we test implementing a daily, monthly, and quarterly rebalancing, which provides mixed backtesting results. The total return was slightly higher for monthly and slightly lower for daily and quarterly rebalancing. 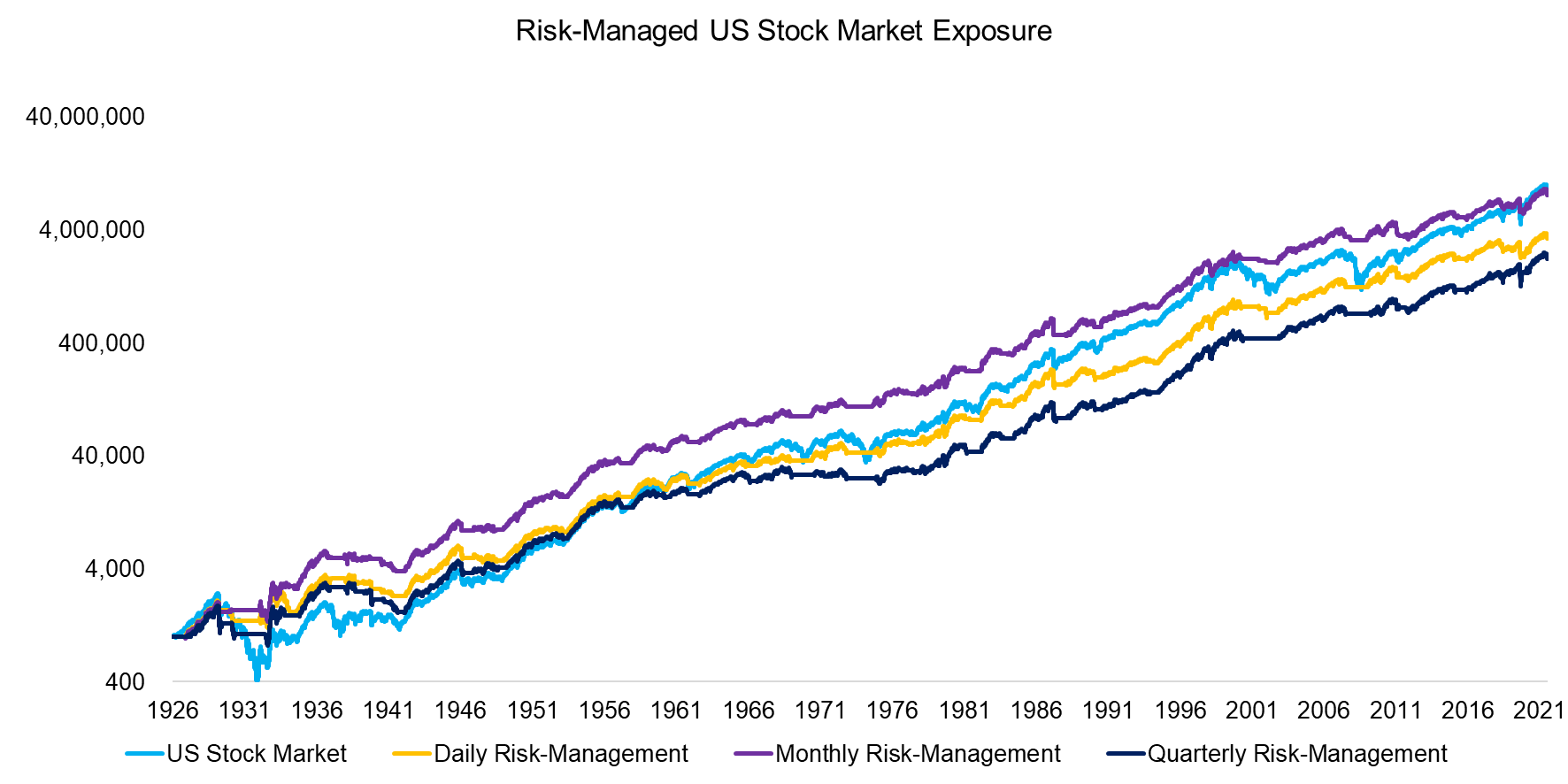 The results for risk-managed US stock market exposure should only be seen as indicative as transactions are excluded and the precise date of rebalancing matters when it is slower than daily.

Also, the focus should be rather on risk-adjusted than absolute returns. We can analyse the drawdown profiles and unsurprisingly find that the drawdowns of risk-managed strategy were lower than those of the continuous allocation to US equities. The drawdowns during the tech bubble implosion in 2001 and during the global financial crisis in 2009 were reduced by more than 50%, which are highly attractive characteristics.

However, no risk management strategy is perfect and there were also times like in the 1940s when the framework worked less effectively. Furthermore, the quick stock market rebounds in the most recent decade post minor crashes were also problematic for the strategy as it represents a slow-rather than a fast-moving system. It is more tailored for a bear market rather than a spontaneous crash like in 1987. 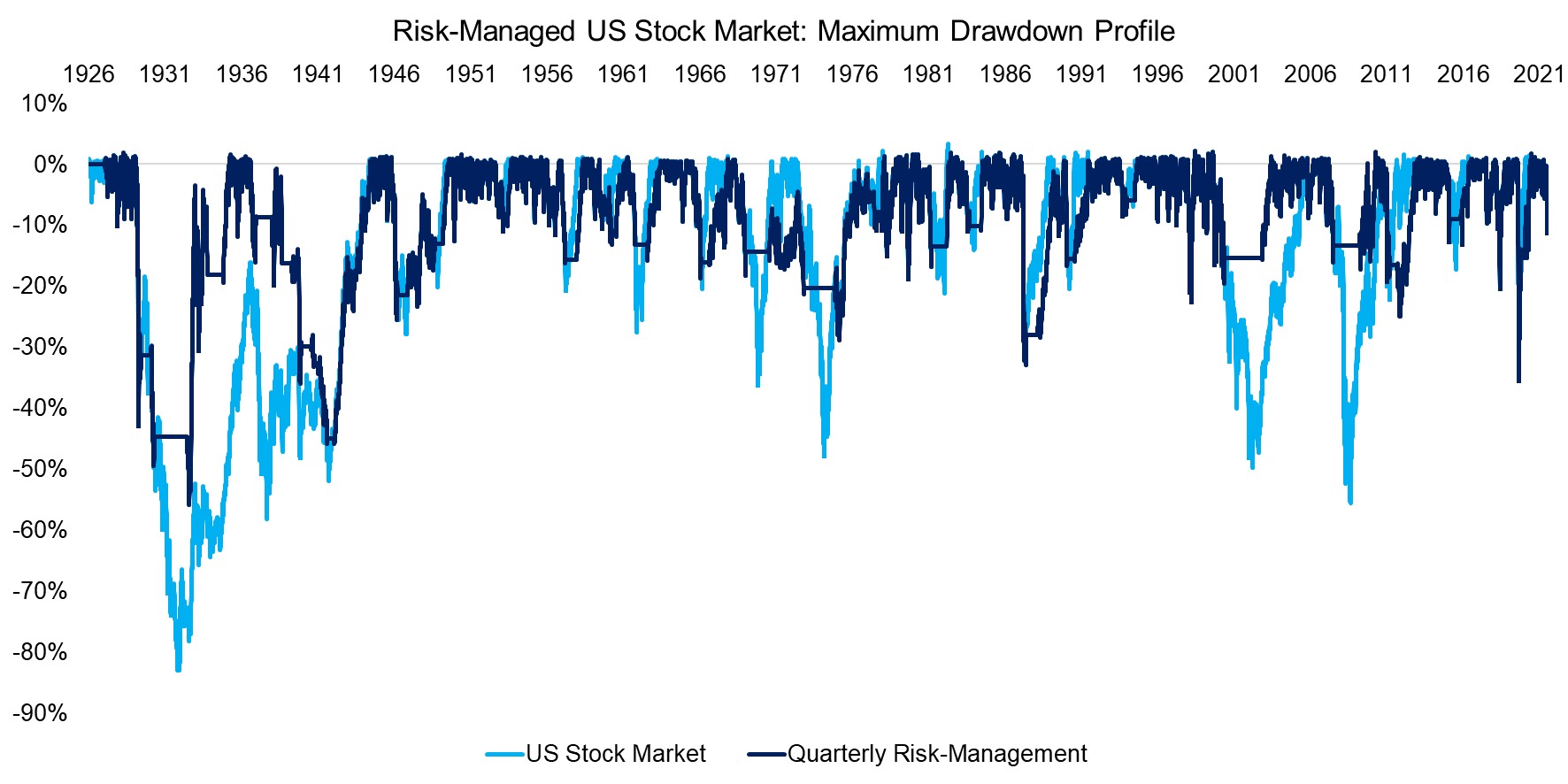 In order to further evaluate the risk management framework, we test this across 24 developed countries and five regions. Data is available since 1984, so includes a few bull and bear markets.

We want to reduce the impact of transaction costs and focus on a risk management system that does not require much maintenance, so assume quarterly rebalancing. We observe that implementing such a strategy would have reduced the annual returns from stocks across all regions. It seems risk management has a price and does not represent a free lunch. 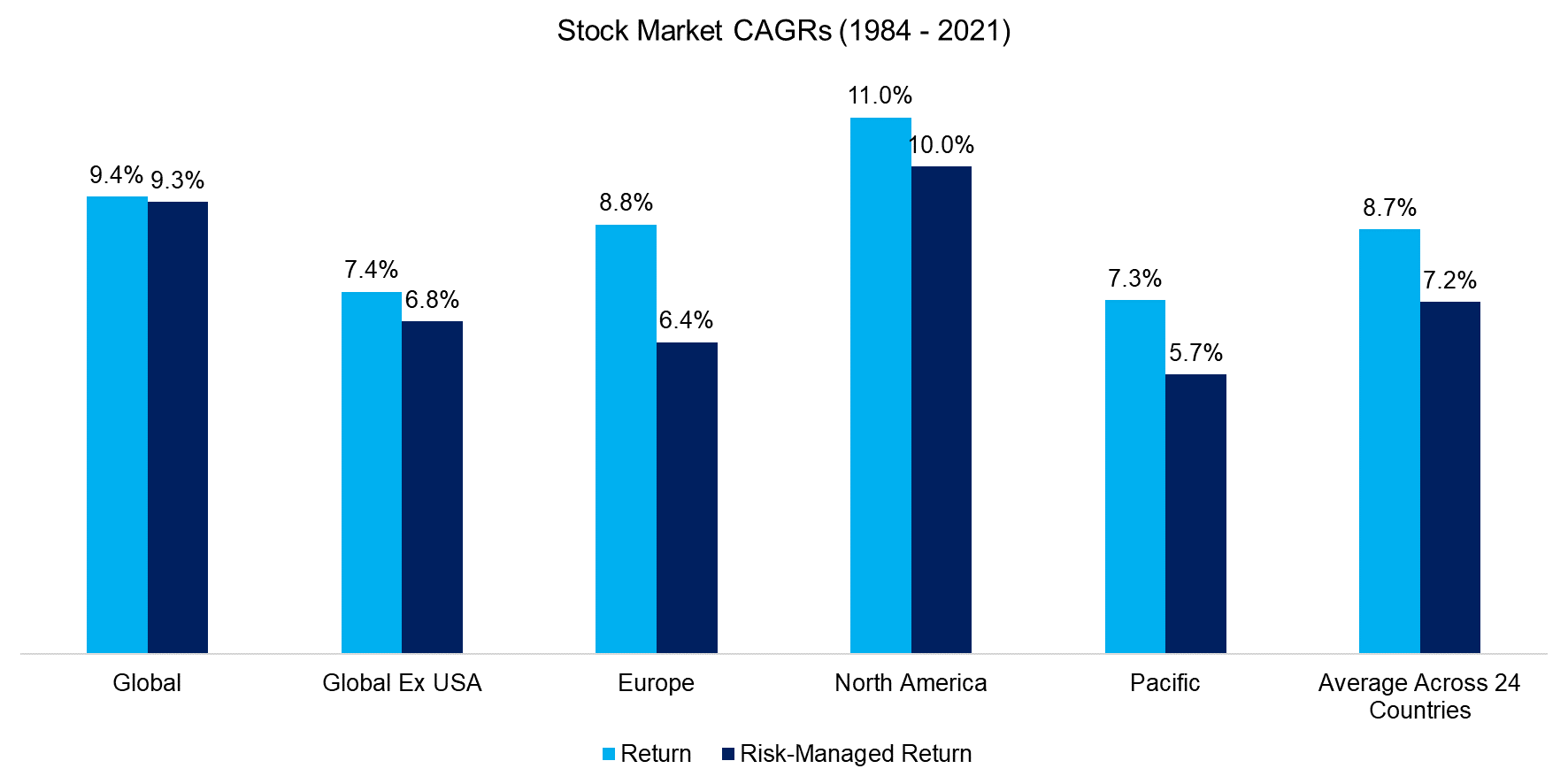 Although implementing this risk management strategy has led to reduced returns, it also has resulted in significantly reduced maximum drawdowns across markets. Most investors become emotionally challenged by the portfolio when losses exceed 50% which unfortunately often results in selling stocks at stock market bottoms.

Reducing emotional stress leads to more rational investment decisions, which may justify the costs in reduced returns investors are paying for such a strategy.

Finally, we turn the perspective from absolute to risk-adjusted returns, which highlights that the risk-managed portfolios generated higher Sharpe ratios than pure stock market exposure. Naturally, any cash could have been reinvested in short-term bonds that would have provided an additional return, so the returns of the risk management strategy can be viewed as slightly understated, although they also exclude transaction costs. 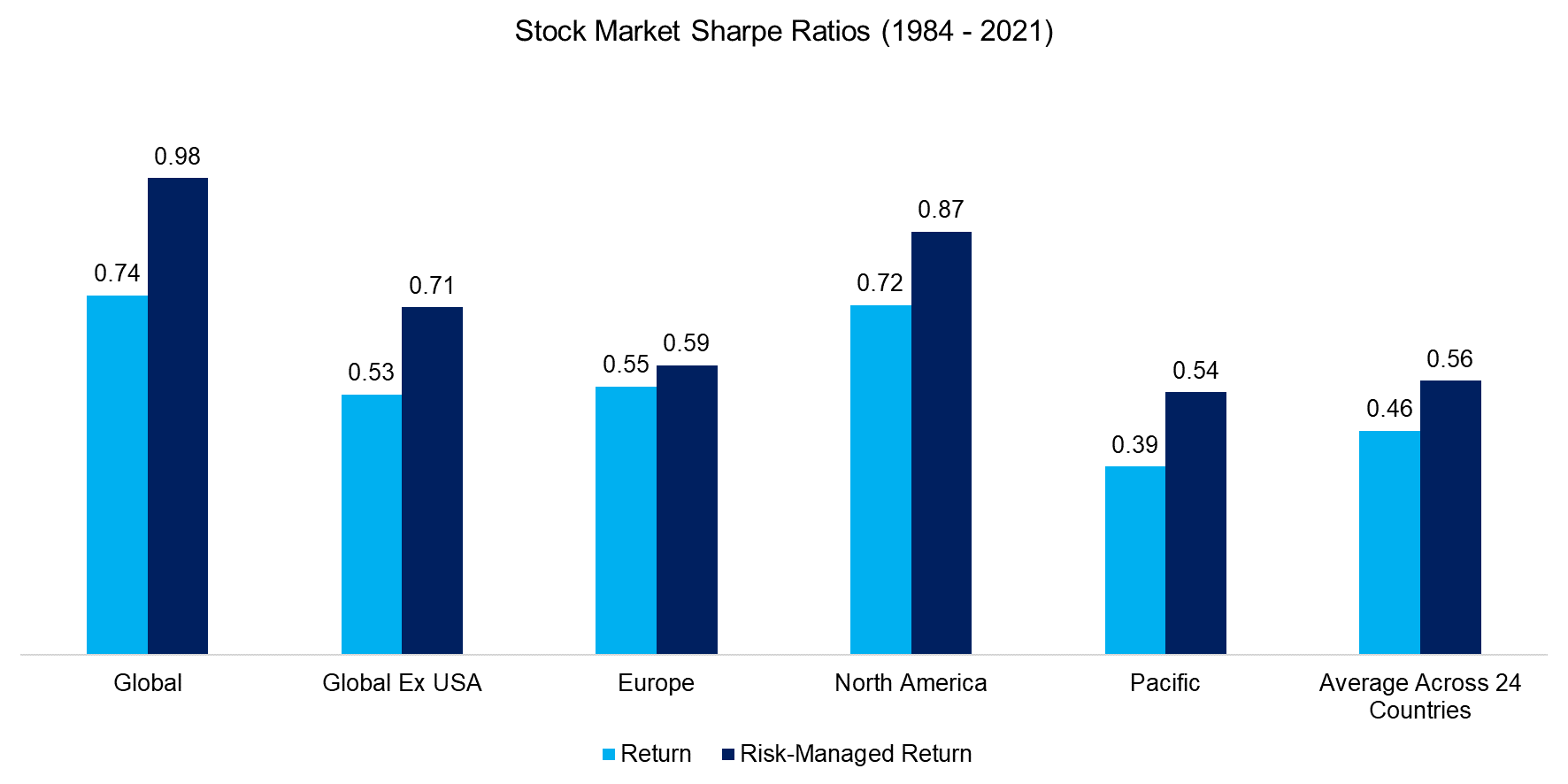 It can easily be argued that diversification was perfectly sufficient for risk management when looking back. Sure, stocks went down occasionally, but a bond allocation reduced the drawdown, and stocks always recovered.

Although true, this is mostly a perspective of US investors and is less accurate for many other stock markets. However, more importantly, going forward even US investors will have to adjust their return expectations as bonds have become far less attractive given low yields. And stocks are trading at record-high valuations, which implies poor future returns.

The need for diversification is as great as ever, but it has become much harder given this set of cards. Complementing a diversified portfolio with a risk management overlay for certain asset classes should be considered. Better to be safe than sorry.