The case against emerging market equities

Seeing latex slowly dripping out of rubber trees into wooden bowls on a plantation in Malaysia was a fascinating experience as a teenager. We had a great local guide that described how the milky substance had to be collected daily, which would then be processed into rubber. He also mentioned that he was living on the plantation with his seven children, which he attributed to the lack of electricity post-sunset.

Many people expected the COVID-19 crisis to result in a population boom. After all, most couples have been locked up with not much to do. However, some preliminary statistics for 2020 show that in some countries the number of births actually declined. In China, there were 15% fewer births according to their Ministry of Public Security. In South Korea, deaths exceeded births for the first time as per their health ministry.

Low birth rates are not only an issue for developed markets, but also for many emerging ones. Given that the change in the working population is one important driver of GDP, this trend will result in lower economic growth. In turn, this makes the long-term outlook for stocks less attractive.

Emerging markets (EM) stocks have been marketed in recent times as a way to escape the expensive valuations of US equities. Although the performance of EM stocks has been disappointing over the last decade, investors should be forward and not backward looking.

However, there are also some structural arguments against emerging markets stocks that investors should consider, and we outline them in this research note.

Valuations are no longer cheap

The average price-to-earnings multiple of the MSCI EM Index, which is the most well-known and tracked index for emerging market stocks, is approximately 19x currently. It is roughly comparable to that of international stocks, but significantly lower than the 32x for the S&P 500.

However, EM stocks cannot be considered cheap at these levels any more. GMO, a large US asset manager, provides a seven-year forecast of real returns for stocks that are primarily based on valuations. We observe that EM stocks look attractive on a relative basis, but investors are still expected to lose money in real terms. Only buying EM stocks with a value tilt seems attractive to GMO currently.

Naturally, this is only the perspective of one asset manager and expected returns would increase when markets and multiples decline. It is more a tactical rather than a strategic argument against EM stocks.

Investors should aim to have diversified portfolios, which require uncorrelated instruments and asset classes. However, the global economy has become much more integrated over the last decades. Global stock markets are highly synchronized, making diversification more difficult.

We observe that the correlation of EM equities was 0.8 to the S&P 500 and 0.6 to US high yield bonds between 2007 and 2021. The correlation decreased during some years, but spiked during crisis periods like March 2020, which unfortunately is when diversification benefits were most needed.

Given these high correlations, investors should consider EM stocks more as a replacement for US equities or high yield bonds as it essentially provides similar risk exposures. 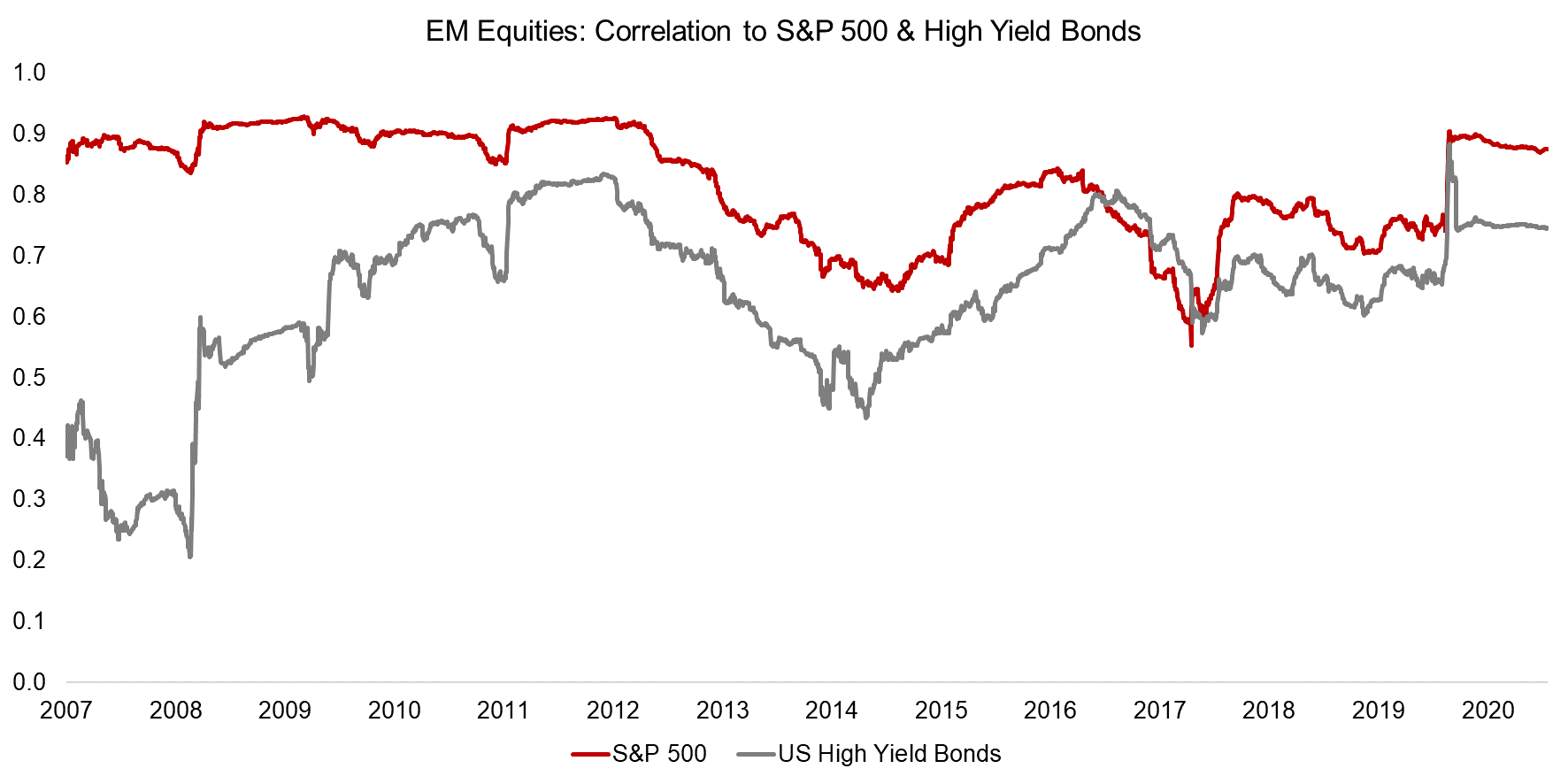 EM IS A BET ON A DEPRECIATING DOLLAR

Most emerging markets are dependent on the US dollar, in one way or the other. It might be a country like India that needs to import oil for domestic consumptions, or a country like Argentina that sells its agricultural products in international markets. Almost all commodities are priced in the US dollar and changes in the currency impact these economies.

We can demonstrate this relationship by comparing the outperformance of EM to US equities and the inverted US Dollar index. We observe that EM equities outperformed when the US dollar depreciated. It is not a perfect relationship (there are none in finance), but it held broadly in the period between 1990 and 2020.

Given this, investing in EM equities compared to US stocks requires a view on the US dollar. However, investors have a poor track record in speculating on currencies and even if they were skilful at timing FX movements, then it would be far more efficient to directly go long or short the US dollar via futures.

As highlighted in the introduction of this research note, some emerging market countries have exceptionally poor demographic outlooks.

Three markets namely China, Taiwan, and South Korea constitute 67% of the stocks in the MSCI EM index. Each economy is expected to lose approximately 50% of its population until 2100, which is a cumulative 720 million people.

It is difficult to fathom the amount of damage these population declines will do to these countries and the global economy. Human civilisation is built on a steadily expanding global population, not a diminishing one. For example, most Chinese invest in property. Half of the residential properties will become permanently unoccupied, resulting in massive wealth destruction. Using a classical framework for reference, it is hard to imagine increases in productivity large enough to overcome this reduction in labour. 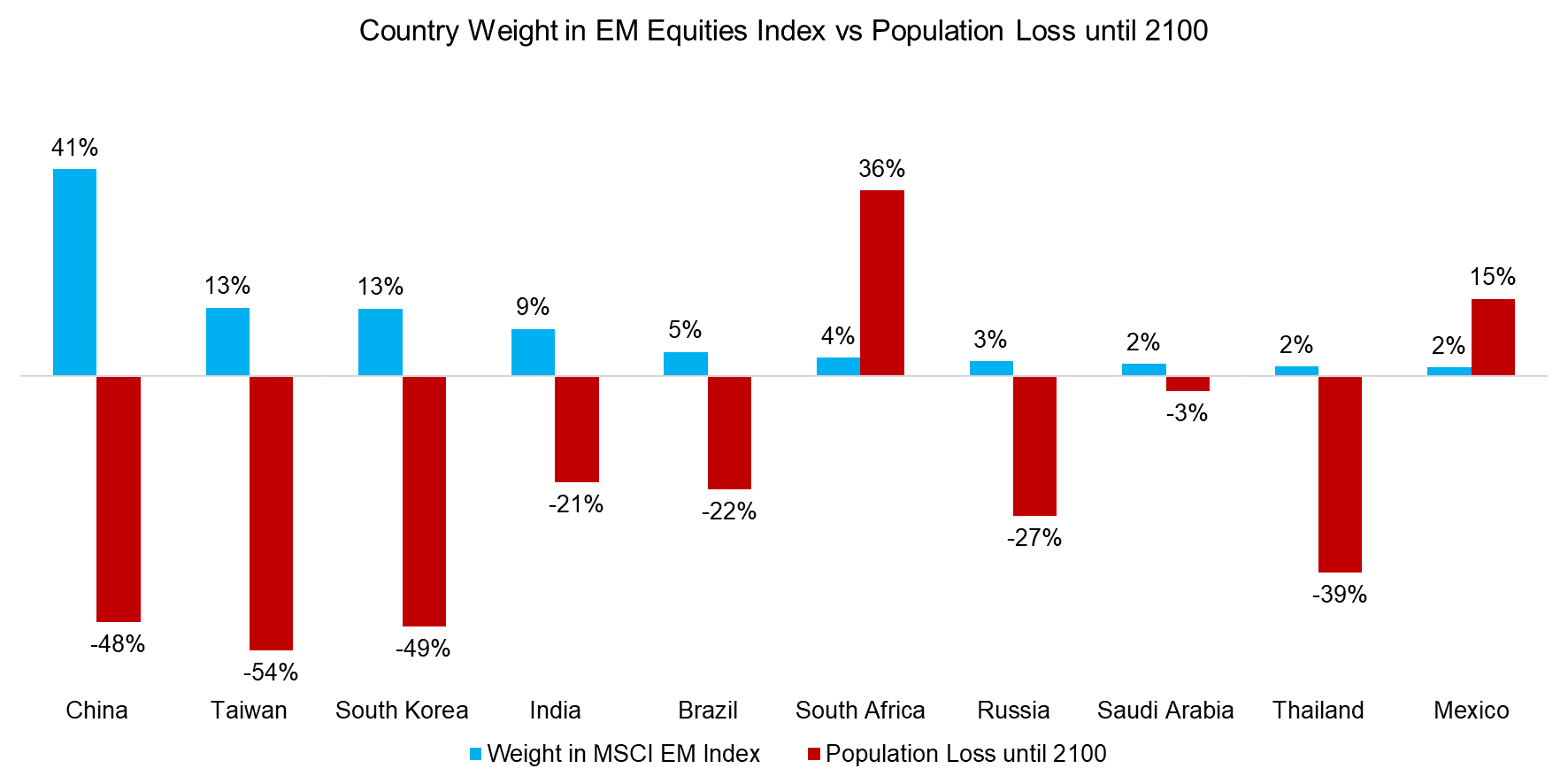 A counterargument is that the index composition will change over time, which is naturally true. However, these index changes are slow and the majority of EM countries with better demographic profiles are found in Africa. Unfortunately, that continent has consistently disappointed to generate steady economic growth and evolve into more stable regimes over multiple decades, so investors may be sceptical about it carrying EM indices to new heights.

EM specialists would likely argue that their skill is in picking the right stocks in the right countries. However, generating alpha seems as difficult in emerging as in developed markets, despite all the information asymmetries and less efficient markets. For example, the S&P SPIVA scorecards show that more than 80% of the mutual fund managers in Mexico, Brazil, and India did not manage to beat their benchmarks over a 5-year period.

On a different note, it is worth noting that although this article is making a case against investing in EM equities, it is more from an absolute than relative perspective. Europe and Japan also feature poor demographic profiles and the US stock market features exceptionally high valuations, which typically leads to low or negative long-term returns.

Investing in stocks today is like being between a rock and a hard place, with the low-hanging fruit harvested a long time ago.