Which sectors and factors outperform in wartime?

Before 2020, the threat of a global pandemic shutting down the world economy was not a top-of-mind concern for most investors. Pandemics were nothing new, of course, but no outbreak in recent history had suggested anything near the magnitude of COVID-19. SARS had broken out in 2002 and Ebola in 2014, for example, but both were contained rather quickly, and their corresponding toll in economic disruption and human lives hardly hinted at what COVID-19 would bring.

Before 2022, even fewer investors saw a third world war as a serious possibility. And while such an outcome is still very unlikely, the Russian invasion of Ukraine has increased the odds. A limited nuclear exchange, let alone a global nuclear war, would have enormous consequences for humanity as a whole to say nothing of the securities markets. Nevertheless, it is worth considering what a simple escalation of the current conflict might entail.

Intuitively, war implies economic damage and falling stock markets. But so does a global pandemic. Yet the S&P 500 was significantly higher one year after COVID-19 went global.

Which raises the question: How do stocks — specifically sectors and factors — perform during times of war?

Performance of stocks during major wars

To answer this question, we analysed the US stock market, which has the best dataset for individual securities and indices. In particular, we evaluated the performance of US stocks during three of the country’s most significant wars: the US Civil War, from 1861 to 1865; World War I, from 1917 to 1918; and World War II, from 1941 to 1945.

These three wars had major implications for the US population and economy. Countless thousands died. Infrastructure was both built and demolished. Major cities were razed. Some parts of the economy collapsed while others boomed. Yet despite all the war-related misery and destruction, the US stock market expanded in both the US Civil War and World War II. Only in World War I did it suffer a net decline.

Source: Finominal, Stooq. Returns are based on close prices unadjusted for dividends

Unfortunately, stock analysis suffers from something of a recency bias: The further back in time we go, the poorer the quality of securities data. As a consequence, the remainder of our analysis will focus on World War II–related data.

The long–short performance of the size, value, and momentum factors was positive between 1941 and 1945, albeit just barely for momentum, according to data from the Kenneth R. French Data Library. The value factor generated a CAGR of 16%, and the size factor 11%.

Theoretically, such returns would have generated attractive diversification benefits for a traditional portfolio inasmuch as they represent excess returns from long–short portfolios. But practically, these returns were calculated before transaction costs and at a time when shorting stocks was an inefficient process at best. Thus, these results need to be evaluated with a grain of salt. 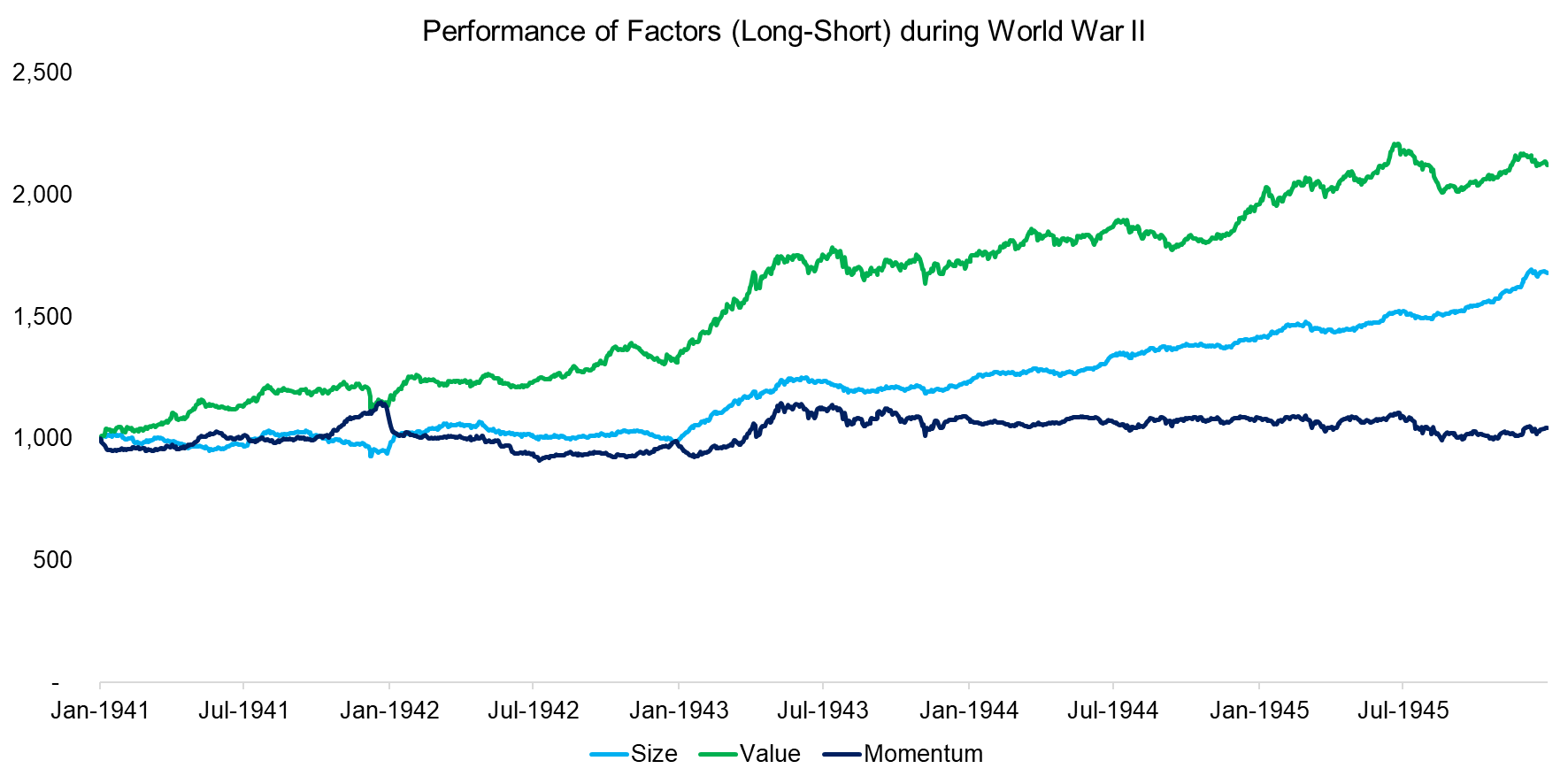 Performance of industries during wartime

But what about sector performance? Did any one in particular stand out during World War II? By analysing the 49 industries from the Kenneth R. French Data Library, we zeroed in on the top and bottom 10.

We expected the top 10 to be dominated by industries that were deeply involved in the war effort — heavy machinery and defense companies, for example. But the best-performing sector was actually printing and publishing, followed by alcoholic drinks and personal services. 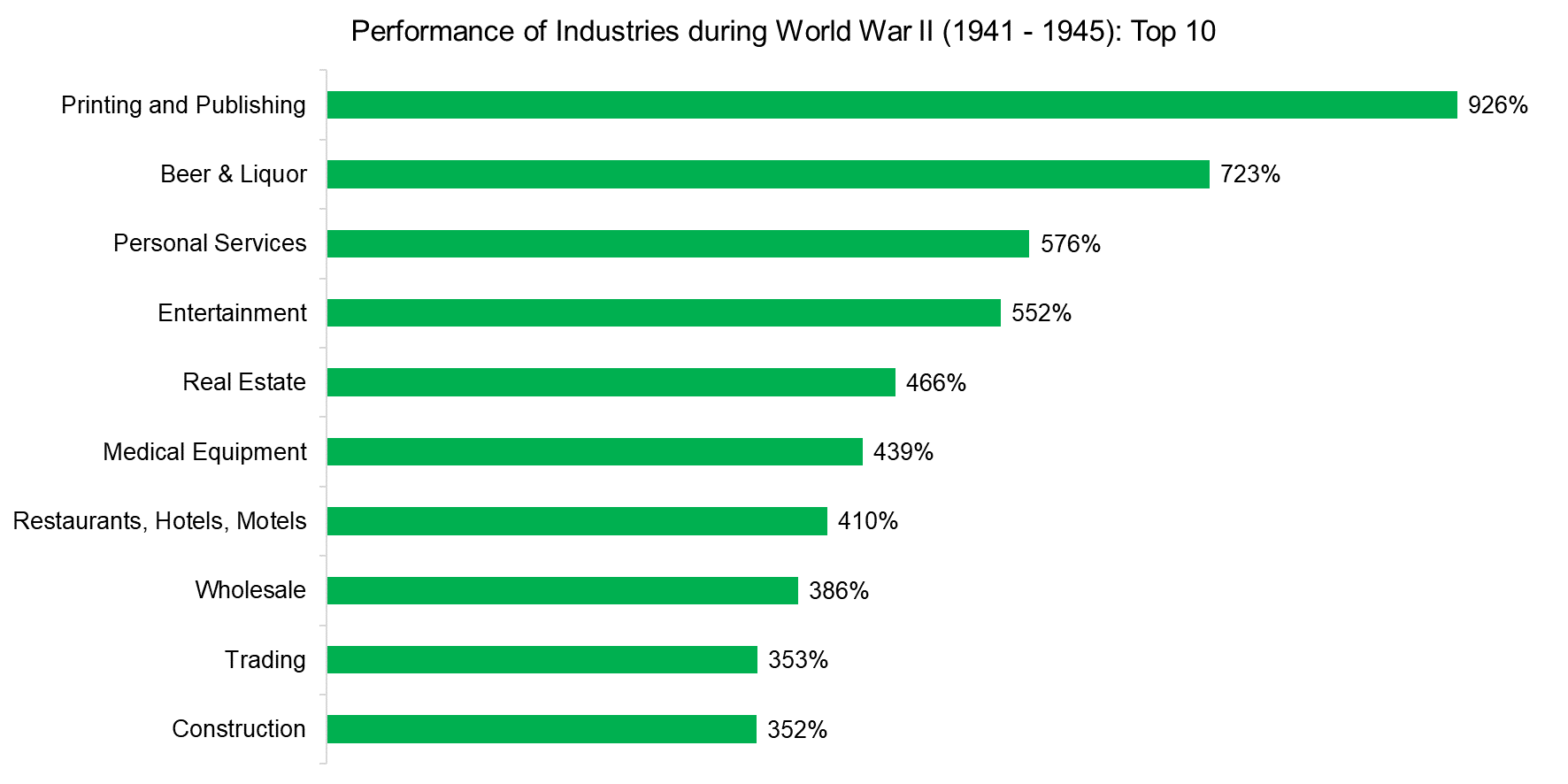 The worst-performing industries held some surprises as well. Though they generated positive returns, tobacco companies came in dead last. This creates something of a paradox given the beer and liquor sector’s 723% windfall. Did people drink more and smoke less during the war? It’s also hard to understand why steel, chemical, and aircraft companies wouldn’t have fared better.

We don’t have any answers except to say that financial markets are full of surprises and never do what’s expected of them. Which is why active management is so difficult and creates so little value. 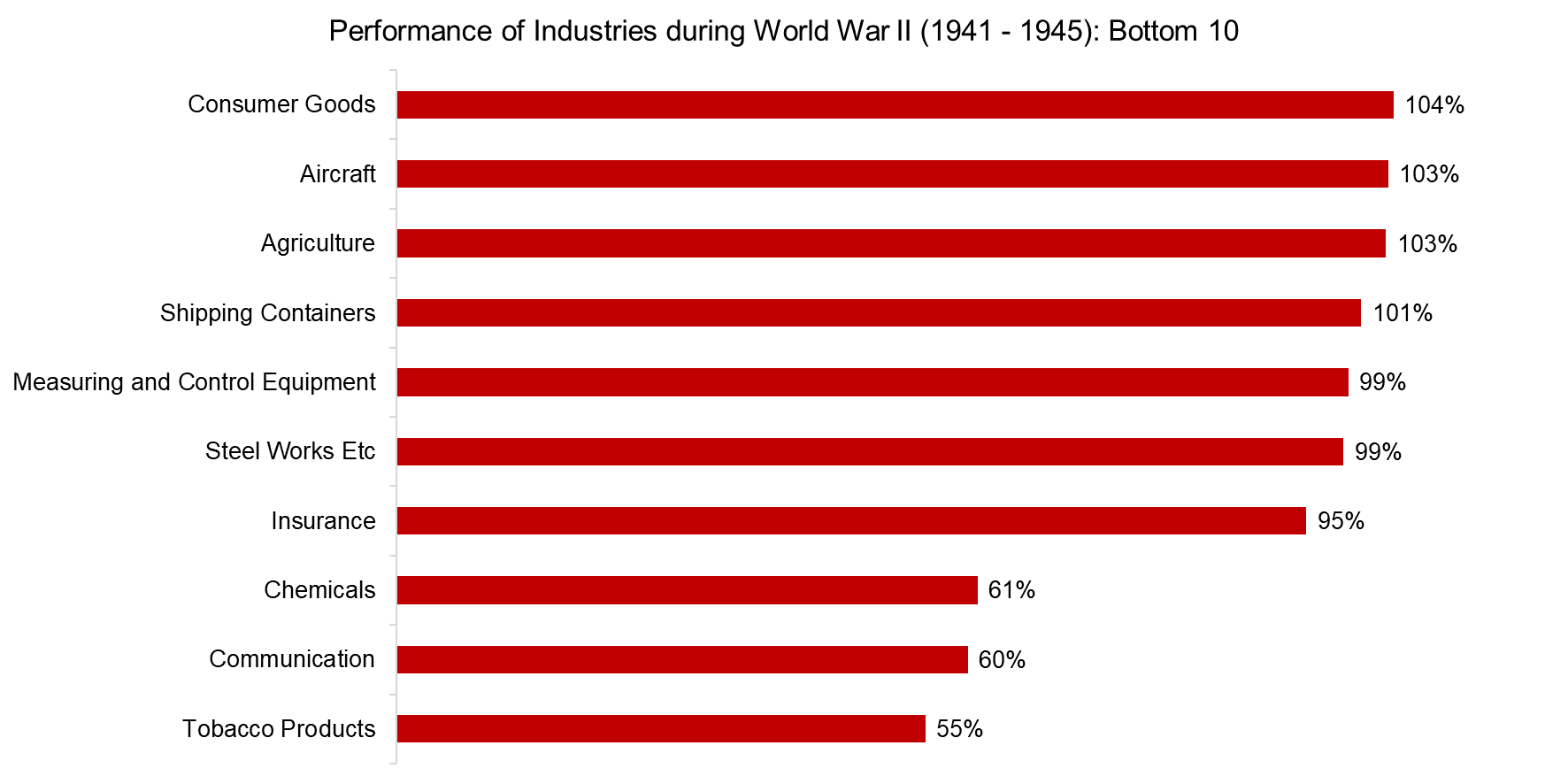 Performance of asset classes during wartime

How did bonds fare relative to stocks during World War II? Equities generated the highest nominal returns between 1941 and 1945, but short-term and long-term Treasuries as well as corporate bonds all yielded positive returns, although after inflation, only corporate bonds had positive real returns.

Of course, the US and its allies won the war. The Axis powers financed themselves by selling government bonds to their citizens. When they lost the war, those became worthless. 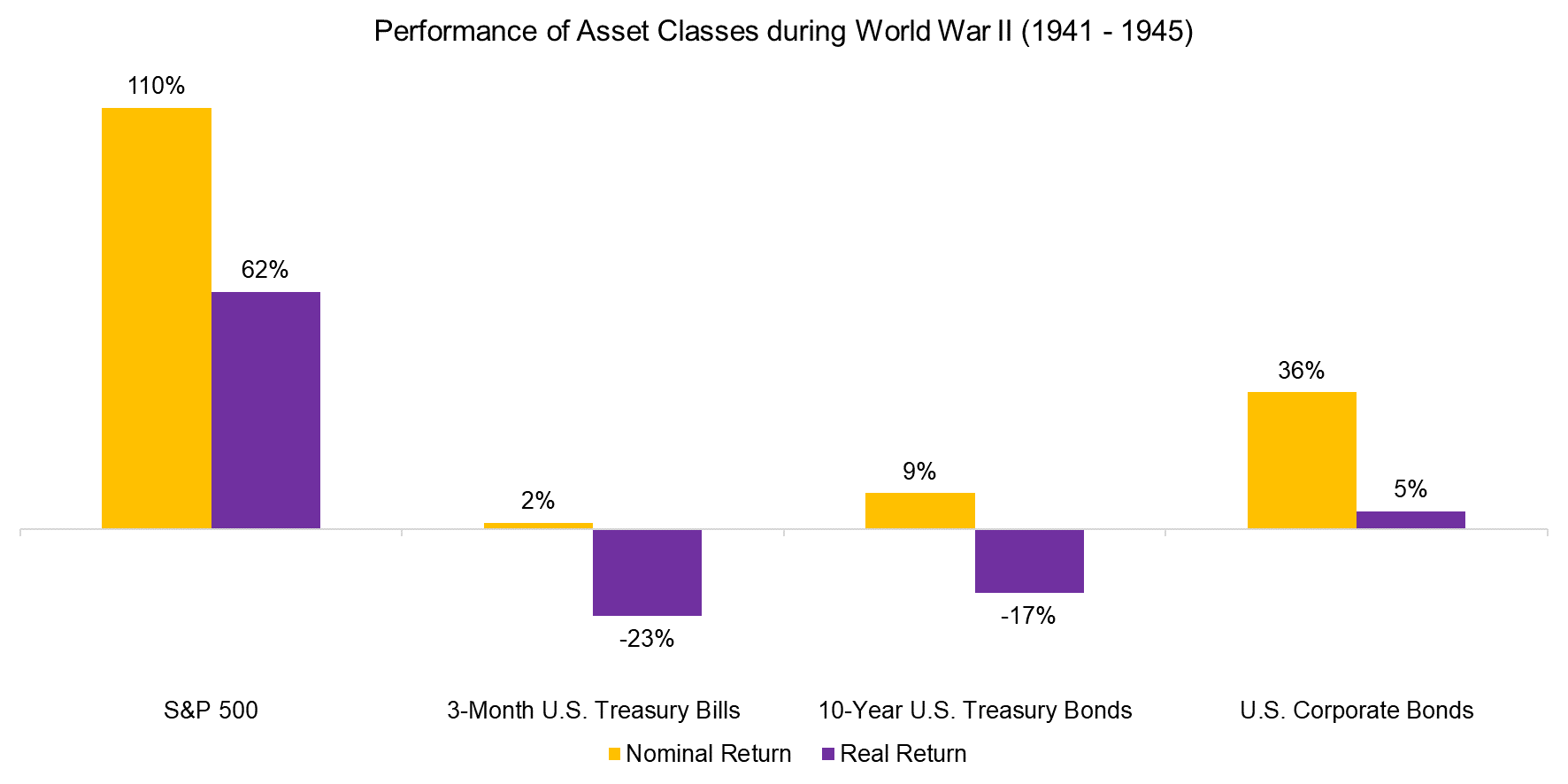 While investors made money with stocks in two out of the three largest US wars, this analysis is backward- rather than forward-looking.

It is difficult to imagine a third world war that doesn’t involve the deployment of nuclear arms. Yet these weapons could destroy much of human civilization let alone the capital markets.

Few investment options have much appeal in such a cataclysmic scenario. Maybe productive farmland in such faraway destinations as Australia or New Zealand would be viable options, although even here, the goal would be more capital preservation than capital growth.